All of the good that Christianity has done in the world sometimes seems overwhelming: Caring for the poor, feeding the hungry, housing the homeless, guiding children and adults into a healthy relationship with God. And on and on. 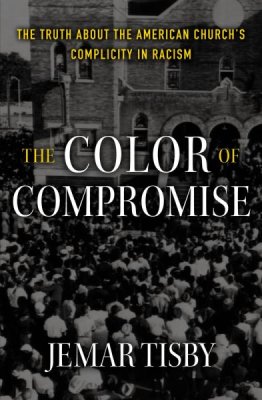 That, however, is not the full story. Some Christians also have both promoted and defended slavery as divinely sanctioned. They've oppressed women in various ways, preached a vicious antisemitism for most of the religion's existence, failed to protect children from sexual predators and sometimes confused loyalty to God with loyalty to country. And on and on.

In light of these conflicting histories, Christianity also from time to time raises up prophetic voices that point to what has gone wrong, to how people of faith have lost their way and then they propose redemptive ways forward. That is what Jemar Tisby, president of "The Witness: A Black Christian Collective," has done in his new book, The Color of Compromise: The Truth about the American Church's Complicity in Racism.

This is a necessary, important and persuasive look at what went wrong from the earliest days of Christianity in the New World until today. Every Christian -- indeed, all Americans -- should know this story. Without an understanding of how the church -- at least major elements of it -- contributed to the systematic oppression of people of color because of white supremacist attitudes, there's no way to grasp where America is today in our uneven struggle to create a society in which all people of any racial identity are respected.

Tisby takes great care to acknowledge that not all American Christians have contributed to this profound ecclesial failure. Indeed, he makes it clear that some parts of the church have always tried to do the right thing in regards to race and that in many ways it was the church that led the Civil Rights Movement of the 1950s and '60s.

But the preponderance of evidence is that many Christians made moral and theological compromises. He writes: "The failure of many Christians in the South and across the nation to decisively oppose the racism in their families, communities and even their own churches provided fertile soil for the seeds of hatred to grow." It all amounts to what he calls "the American church's sickening record of supporting racism."

American Christians, he asserts, "participated in this system of white supremacy -- a concept that identifies white people and white culture as normal and superior -- even if they claim people of color as their brothers and sisters in Christ."

And because many white American Christians don't fully grasp that evil, done in the name of their faith since before the founding of the U.S., "they often shrink back from the sacrifices that transformation entails" now. And yet he is hopeful, suggesting that the failures of the past don't remove the reality that "the choice to confront racism remains a possibility today."

In 250 pages (including notes), Tisby can't, of  course, cover every disgustingly racist act American Christians have committed across history, but his catalog of stories is remarkably full, beginning with a 1667 law enacted by the Virginia General Assembly that said baptizing a slave as a Christian does not result in that slave's freedom. From there Tisby traces America's racial history and the church's many compromises with racism right up until the present day and the Black Lives Matter movement.

In many ways this is a story of American Protestants, though not entirely. Catholics, Anglicans and others are considered, too. But because until recently the American population has been majority Protestant, that branch of the faith gets the most attention -- and especially those who identify as evangelical Protestants.

In the end, this is a story that should provoke not just anger and repentance but also a commitment to do things differently from now on. And Tisby ends his book with a helpful list of ideas for how to do exactly that. Some ideas seem more realistic than others, but on the whole the list contains enough useful strategies that readers should be unable to throw up their hands and say they have no idea how to start fixing this problem now.

The book could have used a little more careful editing here and there in the interest of clarity, but the arc of the story is clear and the arguments convincing. If it's been too long since your congregation -- white, black or racially mixed -- considered this history and what to do about it, this book would be a terrific place to start.

HOW ABOUT SOME CONTEXT AND CONVERSATION?

Nathan Phillips, the Native American man at the center of that major controversy recently in Washington, D.C., suggests he meet with the Catholic high school students involved so they all can learn something from the incident, which went crazily viral on social media. It's a good idea. An even better idea would be for people not to react immediately to social media posts until they understand the fuller story. And an even better idea would be to engage not just Phillips and the students, but also representatives of the Black Hebrew Israelites who also became a controversial part of the story.