A few weeks ago I wrote here about biblical prophets and mentioned a new biography of the great abolitionist, Frederick Douglass (pictured at left). 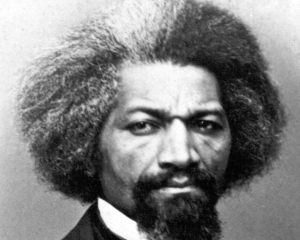 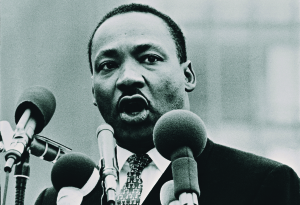 Today, on a day set aside to honor Martin Luther King Jr. (pictured at right), I'm returning to Douglass to explore the distressing truth that almost from the time the first European set foot in the New World, Christianity was promoting a racism that would allow its members to be slaveholders, even as it also was stirring up leaders like Douglass and later King who would base their work against slavery and bigotry in Christianity.

In his new book, Frederick Douglass: Prophet of Freedom, David W. Blight notes that soon after escaping to freedom, Douglass in 1841 began a long speaking career, focusing sharply on the hypocrisy of Christian leaders claiming to follow Jesus while also keeping slaves. This was, Blight notes, "the beginning of a more than fifty-year career for this incomparable itinerant orator, of strained vocal cords and lost voice, but an intrepid heart, oratorical brilliance and a vanity to match."

If that also reminds you of King, you're not far off.

The Maryland slave owner from whom Douglass escaped was named Thomas Auld. Douglass regularly described Auld in his speeches as a "class leader in the Methodist church." Blight says Douglass "introduced those gathered to the rigid religious hypocrisies" of Auld and other church leaders.

For quite some time Douglass was best known for a talk he called the "Slaveholder's Sermon," which Blight describes as "his famous mimicry of a Methodist preacher's appeals to slaves, based on the biblical text 'Servants, obey your masters.' . . .Douglass," Blight notes, "saved his best for the Christian hypocrisy of the South."

Here's an example from a Douglass speech:

"In America Bibles and slaveholders go hand in hand. The church and the slave prison stand together, and while you hear the chanting of psalms in one, you hear the clanking of chains in the other. The man who wields the cowhide during the week fills the pulpit on Sunday. . .The man who whipped me in the week used to. . .show me the way of life on the Sabbath."

King from time to time challenged fellow Christians, especially -- but not exclusively -- in the South with a similar approach. He told them they had to choose. You can be a Christian or you can be a white supremacist, but you can’t be both.

In many ways we are in a different era even from the one in which King so often was on center stage. But Christians are far from having solved their internal struggles with matters of systemic racism and personal bigotry. Which is why those of us who are Christian need leaders who will continue to challenge us on these matters in the spirit of both Douglass and King.

(To add more depth to this topic today, here's a link to a Religion & Politics story about how American Christian evangelicals are dealing with matters of race today in a time of what the story accurately calls "a resurgence in the attitudes and actions King fought against.")

The president of Marquette University in Milwaukee has written this interesting article about why recovering from trauma requires both faith and medicine. It's pretty brief but worth a read because of its emphasis that healing requires more than one approach. As surely it does.