The word theology, as no doubt you know, comes from words that mean God and study. So, obviously, theology is the study of God. Or at least the study of the concept or idea of God, given that it seems hard to study someone you can't exactly see or even reach by cell phone. 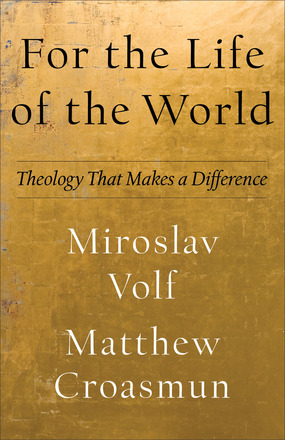 Over the centuries since Christianity separated decisively (and divisively) from Judaism, lots of people have become either amateur or professional Christian theologians. The list is long and much of their work is fascinating.

But two current theologians -- the always-interesting Miroslav Volf at Yale Divinity School and Matthew Croasmun of the Yale Center for Faith and Culture -- contend in a new book that theology today has lost its way.

In For the Life of the World: Theology That Makes a Difference, they argue that theology should always and everywhere be focused on helping people to know what it means to live what they call a "flourishing life." If theology isn't exploring that concept and guiding people to such a life, it isn't doing its job right, they say. The book is to be published Tuesday but is available now for pre-order.

I think they're right. But this book is not aimed at the people whom theologians should be guiding. Rather, it's aimed at the theologians themselves -- especially the professional academic theologians who occupy chairs in universities and seminaries. Which means that although its ideas are pretty clear, the language used to express those ideas is marinated in academese, the inside-baseball terminology that theologians use.

So although this is a useful book, my hope is that the authors -- or someone -- will follow it up with a book designed to help people in the pews know what they should be demanding of theologians and to help teach them how to demand it in effective ways.

The essential premise of this book is found on the first page: "academic theology ought to be, but today largely isn't, about what matters the most -- the true life in the presence of God. The failure of theology to attend to its purpose is a loss for the church and for the world, for theology is uniquely qualified to explore what matters the most." They call the contents of the book that comes after that accusation a "manifesto."

Volf and Croasmun flesh out several descriptions of what they mean by the "flourishing life," but in essence it's a life of peace, joy, fulfillment, self-giving and usefulness. This idea differs radically from what our culture means by such terms as the "good life," which often simply means an impressive financial portfolio and a three-car garage filled with three expensive vehicles and lots of other junk. They contend that acquiring such material wealth should be a means to a larger and more important end, but too often "the means have become ends." And one of the jobs of theologians is to tell people that hard truth.

The authors also bemoan the reality that in many ways our institutions of higher education, which used to be places where students were free to ask the large questions about the purpose about life, have largely given up that role and, instead, have taken on much more utilitarian tasks of preparing people to be part of an amoral capitalistic economic system. In churches, too, they say, "interest in exploration of the most important question of human existence is waning. This in itself constitutes a cultural crisis of major proportions."

So, in a word, they write, "theology is in crisis, largely because it has lost its nerve and forgotten its purpose to help discern, articulate and commend compelling visions of flourishing life in light of God's self-revelation in Jesus Christ."

The bulk of the book is an exploration of that crisis and then an attempt to draw a tentative picture of what a flourishing life might look like when rooted in the Bible, especially drawing on the thinking of the Apostle Paul.

One especially interesting concept in the book is the idea of prolepsis, which in prophetic tradition means describing an event as taking place before it could have. Which is to say that it anticipates and answers an argument before it's advanced. So the Apostle Paul, for instance, sees deep proleptic meaning in the sacrament of the Eucharist, which anticipates the full flowering of the kingdom of God now, before it has fully come, signified by the presence of Christ in the elements of bread and wine right now, before Christ's expected return.

A small criticism I have of the book is the authors' use of some illustrations that don't immediately make clear the point they are trying to illustrate. The drawings seem like they are there because some editor suggested breaking up the print with art work. I found them mostly a useless distraction. But maybe professional academic theologians will eat them up -- which would indicate one more difference between them and people like me.

In any case, if the world of Christian theology needs a good kick in the pants -- and I think it does -- this book is a good start at that. My hope is that besides appealing to professional academic theologians, this book will help people in pastoral roles draw new inspiration for ways of doing ministry that go deep into why we are here at all.

Many Americans are unaware that approximately 20 percent of the Africans dragged to the U.S. as slaves were Muslim -- some of them not just literate but also highly educated. The Library of Congress has just made available online the only known autobiography of such a slave written in Arabic. It can, via a first person account, take us back earlier than the autobiographies (he wrote more than one version) written by the great abolitionist Frederick Douglass in the 1800s.