This year, 2018, may well be remembered as the time in which an important shift occurred in the Catholic Church, one that finally convinced not just the people in the pews but many of the leaders of the church that something has to change in the institution's approach to the now-decades-old scandal of priests abusing children and bishops covering up for them. 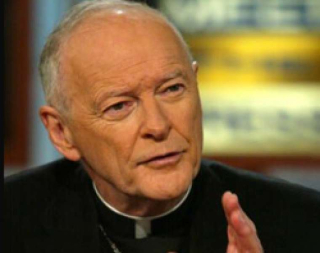 One sign of that is that the National Catholic Reporter just named disgraced Cardinal Theodore McCarrick (pictured here) its "Newsmaker of the Year."

When the Vatican removed McCarrick from ministry after revelations of a long history of abuse, this NCR editorial notes, "The secretive, all-male, allegedly celibate clergy culture, where bishops can enjoy privileges once reserved for royalty and the extremely wealthy, was coming apart. There is no place left to hide. Insiders knew that — many of them saw it coming — and wondered when the scales would tip toward total disclosure. But it remained largely a deep-in-the-Catholic-weeds understanding of things. Theodore McCarrick helped move it into the open."

Some people who have stuck with the church through this horrific scandal have begun leaving, a deeply painful choice that they did their best to avoid.

Their departure is yet one more voice calling for significant institutional change in Catholicism.

As the NCR editorial notes, "McCarrick's fall provided the world with a rare look at a privileged life, protected by clerical secrecy and advanced by accumulated power and access to monied interests. It was all fertile soil for corruption. He was the beneficiary of a system that remains in place. If it is not radically reformed, changed well beyond alterations to institutional structures and norms, the corruption will continue in one form or another.

"Theodore McCarrick paid a huge price for his deception and betrayal of trust. He did not, however, act alone. He was enabled by peers who operated within an ethos that encouraged secrecy and protection of hierarchical privilege at all cost."

I have said again and again that the world needs a strong, healthy, compassionate, merciful Catholic Church. But it can't be any of those things so long as its Theodore McCarricks can go decades without being forced to confront their egregious sins. If the church leaders can't fix this now, when members are demanding change, the future of the church looks grim, indeed. And should.

HOW EVEN POPE FRANCIS GOT COMPROMISED

Staying on the same subject today, I offer you this link to an AP story about how Pope Francis took far too long to confront the sex abuse scandal in the church. The result, the piece says, is that "damage to his moral authority on the issue has been done. Before his eyes were opened, Francis showed that he was a product of the very clerical culture he so often denounces, ever ready to take the word of the clerical class over victims." Can he now recover? I'd like to think so, though it's really late and he may not have enough time left in office to undo the damage.