Home Archives Profile Subscribe
Do we live by instinct or daily mindfulness? 12-24-18
Time for Americans to talk war and peace: 12-26-18 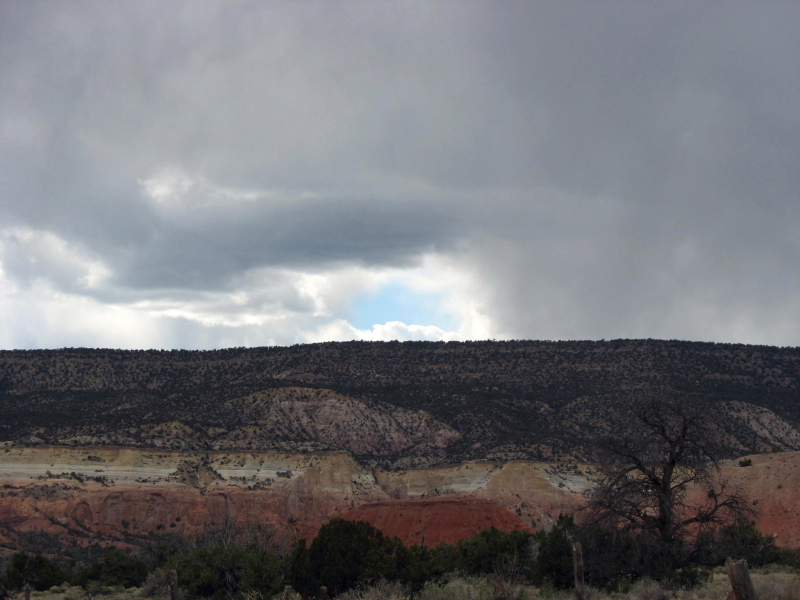 I'd like to offer you a small gift today. Below is a column of mine that ran in The Kansas City Star on July 31, 2004. And I think it says something useful about the God of Christmas. The headline on it was:

Grace and the thirsty ground

ABIQUIU, N.M. -- Soon after we arrived at our lodge here (at Ghost Ranch), the rain slanted in from the west-northwest and gave this high desert country a rare and lovely drink.

The reddish-orange penstemon flowers, which a tiny green hummingbird had just been visiting, began to drip luscious wetness onto the hard ground, and the purple salvia tangoed in the welcome winds.

This makes no sense, I thought, and it isn't fair. A drought has plagued northern New Mexico for months, and suddenly -- as if on some whim -- the rain falls. And not just some weightless mist or a few fat drops that vanish in the aridity but rain that turns into an afternoon soaker, rain carried on insistent winds that bend the fir trees and junipers. The dry arroyos filled up with creamed-coffee-brown water that cascaded downhill as if it were alarmed by something dangerous and was crazy to escape.

But fairness, of course, has nothing to do with it.

Glass-half-empty people, who demand fairness, might call this rain nature's or God's fickleness. But I'm a glass-half-full person, and I agree with the theologians who would call it common grace.

Jesus talked about common grace when, in Matthew, he said, "he makes his sun rise on the evil and on the good, and sends rain on the righteous and on the unrighteous." The God he described is simply prodigal, if indiscriminate, with gifts.

And why is the God of the Bible like that? What kind of wimpy God is it who gives treats to good and bad people alike? Does the deity have no discernment, no Santalike system for making lists and checking them twice to see who's naughty, who's nice?

Well, those are very human questions -- reflecting the way people would run the world if it were up to us. It's one reason we make such a mess of the parts of the world we do try to manage.

Common grace, paying no heed to merit, today delivered prayed-for rain. It sent thunder booming along the tops of mesas, growling at us, making us feel small and in need of shelter. It made the trees dance and the swallows dive through the drops. It offered life-giving water to life that thirsted.

People of faith sometimes attribute both good and bad things to God, praising God for heartbreakingly beautiful sunsets and blaming God for the deaths of children struck by lightning, squashed by trucks or eaten by cancer.

There is, in such discussions, wide room for disagreement and different perspectives about the nature and purposes of God. But wherever people come down in such arguments, they all know in their truest hearts that if it were up to them, the world would almost never experience common grace.

Humans are prone to judging, to figuring and odds-making, to keeping scores and grudges -- all our CPA, bottom-line ways -- and in the end they would cave in to that and never send rain on both the just and the unjust.

If we really are created in the image of God, somehow our ability to grant grace to all people has gotten largely left out of the equation. The characteristic is so rare that we call the few people who have it saints. I know many lovely and generous people but none who at all times and in all places is capable of bestowing common grace on everyone.

Some years ago, when I taught Sunday school to sixth- and seventh-graders (many of whom by now have become mothers and fathers), their reaction to the parable of the prodigal son was inevitably the same. They thought it was unfair for the father (who, in the parable, stands for God) to treat his no-good son with such love and generosity. The son who stayed home and was obedient should have gotten all the grace, they thought.

Yes, but the point of the parable is that God doesn't work in such calculating, eye-for-an-eye ways. The God of that parable is generous, bestowing grace without measure to people without merit. Many would say the same of nature in all its naturalness.

Some people imagine that God -- like some celestial schoolmarm -- carefully decides who gets rain, who sunshine, who snow. Others think it all happens by some impersonal force that can be scientifically explained. In either case, the rain falls unexpectedly on the just and the unjust. It falls in the desert and in tropical rain forests.

And it is a humbling reminder about our own pettiness, our count-the-costs ways. If it were up to us, common grace would be as uncommon as gully-washers here in New Mexico's high desert country.

If you want a location where the celebration of Christmas usually is low-key, quiet and not very commercialized, you might do well to pick Israel, this story suggests. Long ago I was in Bethlehem for a Christmas Eve service at the Church of the Nativity. It was packed. But, as I recall, nobody mentioned Santa, so at least the focus was on the right matters.