Home Archives Profile Subscribe
No Christian holiday is as political as Christmas: 12-21-18
Do we live by instinct or daily mindfulness? 12-24-18

A few weeks ago, an 18-year-old college freshman committed suicide. His funeral Mass was held at a church in Michigan, where the priest delivered a sermon that spoke frankly about suicide and that the family believed was terribly unfair and not comforting. 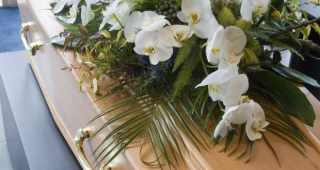 This Slate piece tries to unpack why many Catholic priests struggle with funeral services for people who have died by suicide. One reason the story is helpful is that it gives readers a link to the priest's (slightly redacted) homily so readers can decide for themselves whether the priest was out of bounds or, rather, was simply speaking frankly about church beliefs. In fact, as you read that article I encourage you to click on the sermon link and read it for yourself.

As the piece notes, "The conflict illustrates the widening chasm between the sober rituals of a Catholic funeral and the expectations of families who prefer an upbeat 'celebration of life.' In the Catholic tradition, a funeral is not just a time for consolation — though it is that — but also a worship service, and an obligation to pray for the soul of the deceased. 'The church is very clear that [homilies] are not to be eulogies,' said Michael Heinlein, a columnist for the Catholic publication Our Sunday Visitor. 'The problem is that’s what people want. Many priests have simply given in to that.' (The Order of Christian Funerals, the church’s guidebook for funeral services, specifies that eulogies are best delivered at the wake, rather than at the funeral itself.)"

Something similar has happened in Protestant funerals, too. Which is to say that sometimes they become not what the church says they should be -- a witness to the resurrection and a retelling of the gospel story -- but, rather, a loose time for story telling that contains either little theology or some home-brewed theology that doesn't match church teaching.

(The excellent book to read about all this is Accompany Them with Singing: The Christian Funeral, by Thomas G. Long.)

To go back to the Slate story, it also noted this: "Suicide often complicates the tension between pulpit and pew. For centuries, the church banned Catholics who died by suicide from receiving full Catholic funerals and from being buried in Catholic cemeteries. Those strictures are no longer in place, and the church now acknowledges that mental illness and other suffering often plays a role in suicide. But the stigma lingers, as it does in much of secular culture."

Because theological and biblical illiteracy are rampant in Christian pews and because funerals often are attended by people who are not part of the same faith tradition as the deceased and, thus, don't quite know what's happening or is supposed to be happening in a funeral, priests and other pastors would do well at the start of such services to explain briefly what is happening and why. And if the homily is not to be a eulogy, the officiant should explain that stories of remembrance will be encouraged after the service as the family gathers to greet friends.

But it's also true that priests and pastors leading funerals should be as clear as possible with the family about what they intend to say and why they intend to say it. If the family disagrees about some of that, the time to work out those disagreements is before the service. To be slammed by something unexpected, as happened in this case, is primarily a failure of the priest, who should have been much clearer about where he was going with this service.

Leaders of all faith traditions would do well to study this particular case to determine what went wrong and to prevent such things from happening to them.

A funeral, after all, is a time when families need comfort, but it's also a time when the religious community can restate what it holds to be central to its faith. Those two goals should not result in conflict that can't be resolved.

OH, MY: LOOK WHAT ROBERT ALTER HAS PRODUCED

My favorite translation of the Psalms is done by Robert Alter of the University of California at Berkeley. Not only does offer fresh and insightful translations these ancient hymns of faith -- which, by the way, almost certainly were not written by King David -- but he also provides translation notes that explain and enlighten his word choices. Now Alter has translated the whole of the Hebrew scriptures in a three-volume set called The Hebrew Bible: A Translation with Commentary. And this New York Times story about Alter and this important work helps all of us understand why Alter would even try to do this and why he has succeeded in so many ways. "Published this month," the story reports, "it represents the culmination of nearly two and a half decades of work. . .As a translator, he has tracked verse by verse through the Hebrew Bible to make these structures visible in English, in some cases for the first time. Over the course of his career, he has also helped establish the University of California, Berkeley, where he has been a professor since the 1960s, as one of the world’s premier centers of Hebrew literary study." I can't wait to own this work. More, I can't wait to read it.