Halloween, as you know, shows up later this week. For reasons perhaps only God and Sarah Huckabee Sanders could explain, it is becoming an increasingly popular and increasingly secular holiday. 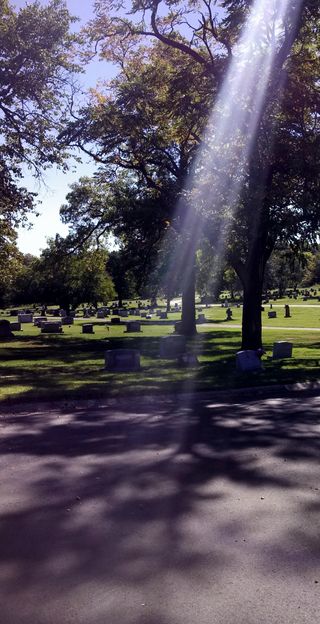 Once upon a time, people of faith, especially Catholics, knew the day as All Hallow's Eve, given that it preceded All Saints Day, which occurs Nov. 1 and has done so since Pope Gregory III moved it to that date back in the 700s. You can read about that and other connections that Halloween has to religion in this ThoughtCo. piece.

I find Halloween intriguing in the U.S. because for most of the year we are reluctant to talk about or think about death and its mysteries. But on Halloween, death, of a sort, is front and center. I say "of a sort" because Halloween doesn't give us a chance to talk about how to prepare for the end of life or about what happens to us after we die. Rather, Halloween garishly dances through our lives in costumes that mock death.

And, trust me, death deserves to be mocked.

Sad to say, Halloween doesn't really give us a chance to make progress in that quest. Rather, it behaves like a run-amok two-year-old having an emotional meltdown. In a fun way. Halloween, which, as All Hallow's Eve, focused people's minds on the reality and inevitability of death, now is simply an excuse to party and not think about death in any serious way.

Which would be fine if only Americans had other, better opportunities to absorb the realities of death, to ponder eternity in a way that could help us integrate death into a healthy life. In some ways that's what Mexico's "Day of the Dead" provides. So good for Mexico.

As for Halloween in America, well, it at least gives us a chance to introduce our children to one of the most pervasive values found in our politics -- extortion. And when they get to be grownups, the kids are going to need to know how and why that works.

(The photo here today is one I took a few years ago at a cemetery near my home.)

THE SPEED OF HATRED TODAY

There once was a time when hate traveled slowly. Person to person. Or through the printed word. Or in speeches given live. Today hate travels with the speed of light via the internet. So we find that the man charged in the Pittsburgh synagogue massacre Saturday had used an alt-right social media platform called "Gab." Free speech concerns may prevent shutting down such sewage-spewing sites, but at least we can and should be aware that they exist and denounce them when they are nothing but tools of hatred.

Every Step an Arrival: A 90-Day Devotional for Exploring God's Word, by Eugene H. Peterson. I mentioned here the other day that this author, whose paraphrase of the Bible, called The Message, has been so popular, just died. It's a terrible loss. But just before his death, this lovely little devotional book came out. It draws from Peterson's many writings to offer readers daily insight not just into theological questions but, more to the point, into a deeper relationship with God. One of Peterson's insights found in this book is, in some ways, reason enough for the whole book itself: "So many times in the biblical narratives, we learn more of ourselves in reading them than we do of ancient history."

P.S.: My latest column for Flatland now is online here. It's about an innocent man imprisoned for 24 years and how he's now using his hard-fought freedom.