What Romero's canonization means for the church: 10-24-18

I was on a road trip to Texas a week and a half ago when the late Archbishop Óscar Romero (pictured here) of El Salvador was canonized, and until now I haven't had a chance to pass along some thoughts about what this means for Pope Francis and for the Catholic Church generally. 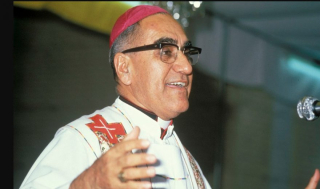 This is one of those internal Catholic matters that I am obliged to approach as a Protestant outsider. The whole idea of naming certain people saints is beyond my pay grade. I'm not sure I get it or have ever gotten it in all its technicalities.

But it's clear that Romero represents what Francis wants the church to be -- a movement more than an institution, and one that is by, with and for the poor, needy and oppressed.

I also want to note that along with Romero, Pope Paul VI was canonized at the same time. He's the one who took over after the widely admired Pope John XXIII had started the Second Vatican Council and then, too soon, died. Vatican II wrapped up under Paul VI. Since then what some people call pre-Vatican II Catholics have been doing what they can to kill or reverse the council's many reforms (often Pope John Paul II and Pope Benedict XVI are included among the resisters to Vatican II), while Pope Francis seems to have dedicated his papacy to breathing life back into those and other reforms.

I've never thought of Paul VI as much of a reformer, but I may well have underestimated him in that regard, perhaps partly because when he is remembered now it's often just for his 1968 document that reaffirmed Catholic teaching against birth control, which caused many to leave the church and many others simply to ignore the teaching. Paul went against many of his closest advisers in making that choice.

One view on Paul VI and Romero together is found in this National Catholic Reporter editorial, which begins this way:

"The significance of the canonization of Archbishop Óscar Romero cannot be underestimated as the bridge Pope Francis needs to convey a universal church trapped in the past toward a future that will purify it and align it with the global poor. And the joining of Romero and Pope Paul VI is no mistake or public relations ploy to balance a radical with a traditionalist. Remarkably, these two saints shared a martyrdom that built the bridge that supports a single trajectory, inspired by the Holy Spirit, that will renew the church and reveal again the mystery of Jesus as the engine of history. It is a thrilling story, and some key figures helped it happen."

The editorial speaks a bit about Paul's "martyrdom," though that term is not to be taken literally. But the piece doesn't convey enough about his work to educate people who aren't well-informed about Catholic history and, thus, know why we should speak about Paul in the same breath that we speak about the heroic martyr Romero.

So we can turn for help with that to this NCR piece about Paul VI, which begins by calling that pope "wavering, indecisive and ambiguous."

But it also notes that "Paul VI notched up considerable achievements. He built lasting bridges with the other Christian churches and faiths, he traveled widely to promote social justice and highlight the lack of equity that characterized the world. He visited the United Nations in October 1965, passionately calling for peace: 'One cannot love with offensive weapons in his hands.'

"He also abandoned the detritus of papal pomp and circumstance, such as the coronation triple tiara. He expanded and internationalized the College of Cardinals, and stopped cardinals over 80 voting in papal elections."

So Paul VI may have been better than I remember him being. But let's turn again now to Romero.

One of the most helpful pieces on him is this one in the current issue of The Atlantic.

As Paul Elie notes in the piece, "Romero’s path to canonization — at an October ceremony at Saint Peter’s Basilica, in Rome — has been tortuous. More than 100,000 people thronged the cathedral plaza in San Salvador for Romero’s funeral, and yet the papal representative to El Salvador and all but one of the country’s remaining bishops stayed away, cowed by the regime and the Vatican alike. As the murdered man became the face of a 'people’s Catholicism' in Latin America — a saint by acclamation — Pope John Paul II and Pope Benedict XVI slow-walked the official canonization process, precisely because of what the archbishop represented."

And what he represented was a challenge to the institutional church, which in many ways is what Pope Francis has come to represent.

The Atlantic piece has some useful background about the time Francis spent in Argentina and some of the mistakes he acknowledges making there. But he learned from those and is also learning from some of his missteps in the current scandal of priests abusing children and bishops covering up for those priests. And thank goodness for that because this scandal seems to have grown into the largest crisis the church has faced since the start of the Protestant Reformation 500 years ago.

(By the way, if you missed Judy Thomas' terrific story in Sunday's Kansas City Star about the priest abuse scandal, here is a link to it. She writes about a bishop who is doing the right things in this scandal.)

So we don't know whether the church Pope Francis is hoping will emerge from his papacy will, in fact, emerge. But the world needs it, so let's hope he succeeds. And maybe some day he will be named a saint, too.

I reported here on the blog recently that the Rev. Eugene Peterson, most famous for his paraphrase of the Bible called The Message, was now in hospice care. Sadder news: He died Monday morning. He was a terrific and insightful writer. If Protestants had saints, he'd be on the list of those being considered for canonization.

Am Mary: Advent Devotional, by Carol Howard Merritt. This is the perfect advent devotional for our time. Why? It's written by a woman and the entries are told in the voice of Mary, mother of Jesus. In a time when we need to hear -- and listen to -- female voices, this small book fills an important void. The author, a pastor, writes in a note to readers that she recognized she always had been told Mary's story through the voices of men "who had never felt the nausea and weakness of pregnancy, the pain and labor of childbirth." This refreshing devotional draws heavily on passages from the Gospel of Luke. Advent on the Christian calendar, which anticipates the birth of Jesus, begins this year on Dec. 2. So you have time to get copies of this for you and possibly for your whole congregation.