Home Archives Profile
Can moral courage be taught or learned? 10-22-18
What Romero's canonization means for the church: 10-24-18

No doubt you've heard or read about how some 80 percent of white Christian evangelicals voted for Donald Trump in the 2016 presidential race. And no doubt you've read that many of them are hanging with him, even though his life has been a model of rejecting evangelical values. 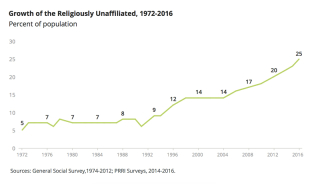 But they're not the only religiously defined group that may have a lot to say about the upcoming midterm elections or about the 2020 presidential election. In fact, as this Tribune News Service piece notes, the "Nones," meaning the religiously unaffiliated, may determine many of the midterm races and perhaps even the next presidential vote.

After all, the Nones now make up about 25 percent of the adult American population, and that percentage continues to grow.

As the piece notes, "The Nones have been traditionally underrepresented at the ballot box, but that’s changing. The religiously unaffiliated accounted for 15 percent of voters in the 2016 presidential elections, a 3 percentage point increase since 2012. The coming election will quite possibly see a further uptick in this number."

Beyond that, "A just-released Freedom From Religion Foundation online survey of 8,500 secular voters reveals a bloc of highly educated, frequent voters determined to counter the Religious Right’s clout and who would strongly support nonreligious candidates. Politicians can tap into this potent force with the right message -- and leave the religious pandering behind."

What we really don't yet know, of course, is how many of the Nones will bother to vote, whether they will lean toward the Republicans or the Democrat or, as seems at least intuitively likely, support independent or third-party candidates.

But it's clear that the party that recognizes the potential voting power of the Nones and works to identify them and attract them will benefit -- perhaps enough to win elections that it otherwise might have lost.

But those parties should understand this: Just because someone is religiously unaffiliated does not mean he or she rejects all religion or spiritual paths. Indeed, true atheists are rather rare in the U.S., even among the Nones.

So it will be important for parties to pay attention to core moral values that the Nones almost certainly hold, though expressing those values in strictly religious terms probably won't sell.

I'll be on the lookout after the midterms to see if anyone does an analysis of how and whether the Nones voted and what difference it made.

(The graph displayed here today came from this 2016 RNS story.)

THE STRESS OF IMPRISONMENT

Andrew Brunson, the American pastor recently released from prison in Turkey after some two years, says he had a nervous breakdown while in jail. Hard to imagine being in that situation and not having some kind of emotional collapse. Hope he gets the help now he needs before leaping back into work.