About the time I headed to Texas last week, a United Nations organization, the International Panel on Climate Change (I.P.C.C.), issued a report full of scary warnings about the state of the environment and where we're headed. 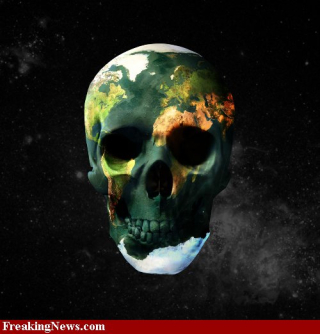 Here's a story about it from The New Yorker by Carolyn Kormann. Using that story, I want to return to this report today.

It focuses on a goal of limiting the rise in the average global temperature to 1.5 degrees Celsius (2.7 degrees Fahrenheit), and Kormann's story notes that the report "tells a nightmarish tale — one much worse than any of those in the I.P.C.C.’s previous reports — surveying the climate-change impacts we’re already experiencing with one degree of warming, and the severity of the impacts to come once we surpass 1.5 degrees of warming.

"Ten million more people would be exposed to permanent inundation, and several hundred million more to 'climate-related risks and susceptible to poverty.' Malaria and dengue fever will be more widespread, and crops like maize, rice, and wheat will have smaller and smaller yields — particularly in sub-Saharan Africa, Southeast Asia, and Central and South America. Security and economic growth will be that much more imperiled.

"'Robust scientific literature now shows that there are significant differences between 1.5 and 2 degrees,' Adelle Thomas, a geographer from the Bahamas and also one of the report’s lead authors, told me. 'The scientific consensus is really strong. It’s not just a political slogan: "1.5 to stay alive." It’s true.'”

Kormann adds this: "The report marks the start of the I.P.C.C.’s latest assessment cycle, the sixth since the organization was formed by the U.N. Environment Program and the World Meteorological Organization, in 1988. Its importance is hard to overstate. The thirty-three-page summary for policymakers — which is based on more than six thousand cited studies, and written by ninety-one authors from forty different countries — is a collective scream sieved through the stern, strained language of bureaucratese. Unique ecosystems will vanish and species will go extinct by the thousands. With two degrees of warming, three times as many insects (eighteen per cent), and twice as many plants (sixteen per cent) and vertebrates (eight per cent), will lose their geographic range, when compared with warming of 1.5 degrees."

In plain language, Earth is facing a disaster that children alive today will experience and pay for in ways hard to imagine fully.

One of the saddest realities about all of this to me is that all the great religions teach environmental protection and stewardship. Yes, certain passages of the Bible, say, can be and have been used to promote "dominion," which often has meant radical, non-sustainable exploitation of the planet. But that kind of theology has been denounced and trounced countless times by saner voices.

And yet the exploitation of the planet continues.

Worse, our environmental ethic often is focused far too much on what one person can do (turn out lights, recycle newspapers) and far too little on the systemic issues that wound the planet (unregulated industrialization, mineral extraction in unsustainable ways).

This problem will not be solved by individuals recycling soda cans. But it won't be solved unless individual people of faith from across the globe make a major commitment to be part of the solution, not part of the problem.

Unless it's already too late for that. And wouldn't that be an inconvenient truth?

(The image you see here today came from here.)

There's sad news today for the many fans of the Rev. Eugene Peterson, whose paraphrase of the Bible, The Message, became a wildly popular book. Peterson has entered hospice care. An e-mail from his son explained that his father's health issues became quite serious recently. If you've never read Peterson, do yourself that favor. In addition to The Message, I recommend Earth and Altar.