Home Archives Profile
As the print era dies, what about sacred texts? 9-25-18
When a religious minority gets suppressed: 9-27-18

In my experience, almost any time I hear a religious leader decry a movement or warn about the possibility of some disaster, I can be pretty sure that he or she is late responding to something that should have been responded to much earlier. 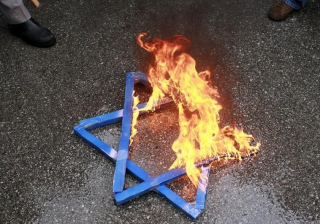 I even detect a bit of that in the admonition from Pope Francis the other day about antisemitism. Humanity, he said, must guard against "new seeds of that pernicious attitude, any whiff of it."

Well, the words are true and welcome. And they represent a radical change from the anti-Judaism that infected Christianity almost from its beginning.

But the resurgence of antisemitism is no new story. Indeed, more than five years ago I did a review here of Alvin H. Rosenfeld's then-new book, Resurgent Antisemitism: Global Perspectives. It was clear even then that one of the world's oldest hatreds not only continues, it never stopped even after the Holocaust.

The occasion for the pope's remarks was the 75th anniversary of the 1943 liquidation of the ghetto in Vilnius, Lithuania. Thousands of Jews died then, part of the approximately six million who perished at the hands of Adolf Hitler's Nazi killing machine.

So, yes, it is important to remember such dates and to study the history of how such history happened. But the pope' words left the impression that antisemitism is a rare phenomenon now and that people should carefully sniff around to see if they can detect any of it. It's in plain sight both here in the U.S. and in Europe.

By the way, I've used two terms here -- antisemitism and anti-Judaism. The former is racial and ethnic in nature. It views Jews people as a hated separate people and promotes visions of a greedy people who want to control the world. The latter is theological in nature. It presumes that Christianity has superseded Judaism and made it irrelevant. It suggests that Jews went astray by failing to recognize Jesus of Nazareth as the long-promised Messiah.

Either "ism" is putrid at its core and must be recognized, named and fought.

And, sad to say, neither is a rare and tiny growth in an otherwise-beautiful forest of right thinking. Breathe in almost anywhere and you'll get more than a whiff.

I've been mostly unaware of the faith backstory of the founder of the #MeToo movement, Tarana Burke. But this Sojourners story tells that interfaith story. Jesus, Burke says, was the first activist she knew.