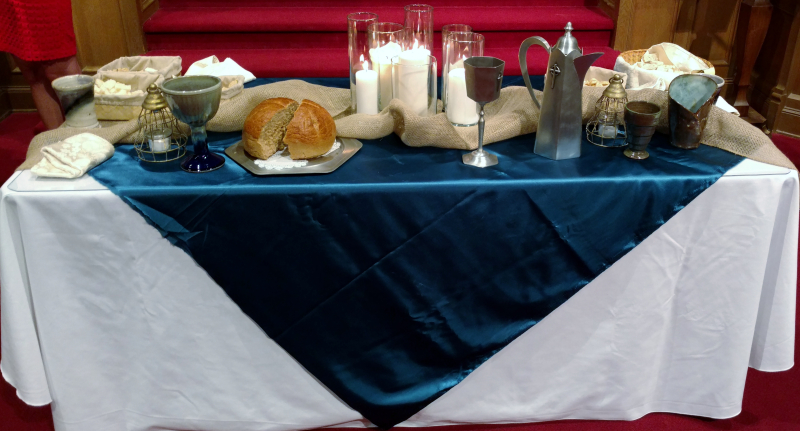 The Pew Research Center, which spends lots of time pondering religion in America, recently offered what it called "Seven Facts About American Catholics."

If you pay attention to the American religious landscape, you pretty much knew all this material, but it was a useful review. You can read it for yourself at the link I've given you in the paragraph above.

One thing in the report that I hadn't paid much attention to is that "the share of Americans who are Catholic declined from 24 percent in 2007 to 21 percent in 2014."

I am not a one-person research team able to match the resources of the Pew folks, but I thought it might be useful to list seven things about American Protestants that seem true and even obvious to me. I wonder whether you'd add to or subtract from this list.

-- They are atomized. Split after split after split has left the Protestant world irretrievably divided, no doubt breaking the sacred heart of Jesus, whom the gospel of John reports praying that his followers all "may be one."

-- Theological and biblical illiteracy are rampant in the pews of many congregations. This, it turns out, also applies to Catholics, Jews and adherents of several other religions, too. Years ago this reality caused me to offer a series of classes I called "Theology Even the Clergy Can Understand." (My efforts didn't fix the entire problems, however.)

-- Sometimes there is more difference between Protestants who call themselves evangelical, conservative and/or fundamentalist and those who call themselves progressive or liberal than there is between Christians and people of other faith traditions. Protestantism is a term that includes a lot of people who disagree about practically everything.

-- Protestants have made a lot of progress in rejecting the traditional misreading of the Bible that declares homosexuality to be a sin. But there is much, much further to go. The next chapter to be written in this story will have to do with whether the 12-million-member United Methodist Church will experience schism over this issue. I suspect it will, despite efforts to keep Methodists united somehow.

-- Protestants used to dominate American culture. At one point -- indeed, until fairly recently -- they made up a huge majority of the population. Today they are just a plurality, not a majority, having slipped below 50 percent of the population, even as the percentage of Americans who identify as religiously unaffiliated has ballooned. This loss of power and prestige and dominance has shaken many Protestants, especially white Protestants and, among those, especially white evangelicals. Which is one reason you saw roughly 80 percent of white evangelical voters abandon their moral center and vote for Donald Trump in the 2016 presidential election. Still, the decline of Protestant dominations is leading some Americans to focus on excellent goals -- pluralism and religious literacy.

-- Protestants of all kinds -- black, white, Hispanic, Asian and other -- continue to supply many of the nation's vital volunteers for charitable agencies, including disaster relief organizations that have been responding to the damage done by Hurricane Florence. There is a volunteer ethic among Protestants that is rooted in the idea that they do good works not to earn God's favor but to express gratitude for what God already has done for them. Many other faith traditions, of course, also provide lots of volunteers -- and they come from the ranks of atheists and agnostics, too -- though in some instances they would provide other reasons than Protestants do for their actions.

-- Despite obvious declines in Protestant numbers and influence, especially among Mainline churches, many Protestants have failed to understand what is happening to them and have imagined that if they just continue to do what good church people did in the 1950s everything will be fine. In fact, that's a recipe for death. Whether enough Protestants will discover that they need to adjust to new times and new contexts isn't yet known. Stay tuned.

(The photo here today shows the Communion table at my own Protestant congregation, Second Presbyterian Church of Kansas City.)

A man from a Baptist seminary has written this piece about his five-year-old daughter asking where God is in the midst of a hurricane like Florence. And he gives some good, standard answers to the old theodicy question of why there is suffering and evil in the world if God is good and all powerful. But my inner parental delinquent wanted to have him answer this way: "Well, dear, God is off messing with the minds of people like Pat Robertson so they'll say goofy stuff like, "God causes hurricanes to punish America for allowing same-sex marriage." Maybe when his daughter gets a little older he can use that one.