Last year, Jonathan L. Walton, (pictured below) the minister at the Memorial Church of Harvard University, did me the honor of inviting me to come to the church in Cambridge to speak about my latest book, The Value of Doubt: Why Unanswered Questions, Not Unquestioned Answers, Build Faith. 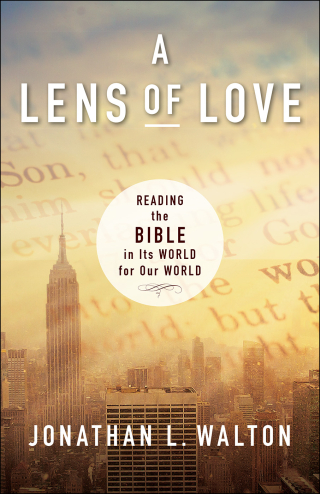 Today I get to return the favor, in a sense, by recommending to you Walton's own new book about how best to read the Bible: A Lens of Love: Reading the Bible in Its World for Our World. And the best part is that I don't feel I need to say nice things about it just because of Walton's invitation to me. The fact is I get to say nice things about it because it's really a terrific book that any Christian who hopes to understand the Bible should read.

Walton offers readers help with how to approach the Bible in an honest, open-minded way so that, as he writes, it doesn't get "placed on our nightstand as part of our bedroom's spiritual decor."

He acknowledges that the "Bible is intimidating. . .The verbiage is often arcane, and we can spend immense intellectual energy trying to keep track of who begat whom and whether Thou is that which begat Thee! Others have noted that the flow of many texts appears random and haphazard, making it seemingly impossible to follow a narrative arc."

Walton draws on his long preaching experience not only to give readers tools to make sense of the Bible but also to decide whether they agree with his understanding of this sacred book. (I do.)

"On the one hand," he writes, "I believe the Bible to be a collection of inspired writings and sacred narratives that point us toward God. On the other hand, I do not believe that divine inspiration supplanted or superseded the human faculties of biblical writers." In other words, "God does not lift writers out of their historical and cultural context. . .Human involvement always dilutes the divine, just as human sinfulness negates any possibility of so-called biblical inerrancy."

Oh, if only biblical literalists and those who claim the Bible is inerrant in all ways would open their hearts to read Walton and to try his sensible and serious approach to the biblical text.

One of the best ideas Walton offers readers here is to try to imagine how God thinks about the stories told in scripture. One of the things that means, he writes, is that "I try to put on the lenses of love to look for those with whom God most aligns, the marginalized and victimized. I aim to step inside of a text and search for the lonely, the left out and those who have been left behind. Here we will find the Spirit of God and God's radical love for us."

Within the biblical text, one can find many stories of evil, suffering, violence and sin. And Walton is quick to acknowledge what theologians call the question of theodicy, which asks why, if God is good and all-powerful, there is suffering and evil in the world. Any answer to theodicy's prime question, he writes, "aims to make sense of or justify God's goodness in light of contradictory evidence."

The problem, of course, is that there is no fully satisfying, exhaustive answer to the question theodicy asks. So unless we choose to reject God altogether, we must find ways to be more comfortable with ambiguity, with paradox, with mystery. And, Walton says, one way to move forward with a relationship with God is to adopt what he calls a "theodicy of protest. This view of suffering rejects all explanations of evil and injustice, while refusing to make excuses for God. A theodicy of protest realizes that a willingness to challenge and even curse God is a radical affirmation of one's faith in God."

As one reads and studies the Bible in some depth, it helps to know what scholars for the last 150 or more years have learned about this library of ancient writings. For instance, they acknowledge that it was not written as history in the way 21st Century Americans understand history. Its purposes were different. So, for instance, Walton notes that "scholars are in consensus that the Israelites were never enslaved in Egypt." Rather, he says, "the exodus story developed over time as God's people wanted to affirm their distinctiveness from other inhabitants of Canaan."

But none of that takes away from the primary message of the exodus story, which is "a theological account of an all-powerful God who can save and deliver."

In both cases, God is seen as the redeemer, the one who saves. That's the point of those stories, not whether Egyptian soldiers died trying to recapture the fleeing Israelites and not whether the nails that pinned Jesus to the cross went through the palms of his hands or his wrists.

Walton understands that neither the Apostle Paul nor Jesus himself came to create a new religion. And he knows -- and says -- that it took a long time for what became Christianity to separate itself decisively from Judaism. To make that point he usually refers to those first followers of Jesus as part of the "Jesus movement." But at times even Walton falls into the old trap of calling those followers Christians before there was any Christianity. It's a hard habit to break, obviously.

One of the problems in the church today, Walton concludes, is that "too many read the Bible through a lens of power. A lens of power interprets Scripture in such a way that it justifies abusive authority and reinforces social hierarchy. A lens of power privileges individual acquisition over altruism and personal comfort over compassion. A lens of power leads to gross distortions of the Bible, as evidenced in the perverse prosperity gospel or the Religious Right. . .

"A lens of love, however, challenges such religious duplicity and political chicanery. . .A lens of love recalibrates our focus back to the teachings of the gospel."

This past Sunday I finished leading a three-week class at my church on the Bible. This new book turned out to be the perfect one to recommend to people who want to continue studying on their own.

A man who teaches religion at Luther College in Iowa has written a new book to say that when non-Muslims repeatedly ask Muslims to condemn terrorism (which they have, often), it's not only a "troubling and unethical" double standard, but also "a form of racist scapegoating.” And yesterday's commemoration of the 9/11 terrorist attacks was a good reminder of his point.

P.S.: My latest National Catholic Reporter column -- and my final one for NCR -- now is online here.

ANOTHER P.S.: Until recently, my blog host, Typepad, was able to allow me to publish each post automatically to Facebook. But Facebook recently has made changes that make that impossible, for reasons not explained. Which is how Facebook does business. So I have to post the blog manually to FB each morning, meaning it gets posted at inconsistent times. If you'd like to receive a link to the blog by e-mail in a more reliable way, look under the "Check this out" headline on the right side of this page and click on "Get my blog by e-mail." Then just follow the directions. A link to the blog post should show up in your inbox early each morning. Thanks, Bill.