Looking to Muslim leadership in Afghanistan: 7-23-18

For more than a decade and a half, American troops and their allies have been fighting the Taliban in Afghanistan at the cost of enormous blood and treasure -- and without any certain good outcome. 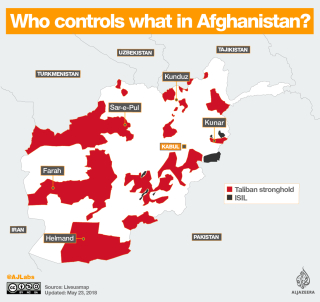 Perhaps it's time to listen to the wise Islamic voice who penned this essay for Time Magazine and imagine how, because the Taliban misused Islam as a weapon of war, Muslim peace activists might draw on Islam's strengths and insights to wage peace.

The author of the piece is Ambassador Tariq Ali Bakhiet, director general of political affairs for the Organization of Islamic Cooperation, the second-largest intergovernmental body in the world; he was previously a diplomat at the Sudanese Mission to the United Nations and at the Sudanese Ministry of Foreign Affairs.

His argument is that the Taliban has succeeded by convincing Afghans that it speaks for Islam as its primary defender. But, he argues, it does no such thing. And not only that, but many Afghan Muslims are coming to understand the false claims consistently made by the Taliban.

He describes how recently 100 Islamic scholars met in Mecca "to discuss one thing: peace."

The peace process, if it can even be called that in Afghanistan, usually has been shaped by Western leaders who simply don't understand Afghan and Islamic culture very well.

"Too often," the author writes, "what has been ignored in this process is the nation’s indigenous and authentic non-governmental leadership. This has consequently prevented change from being led by and for Afghans — the very people who will have to maintain peace. It has also lost sight of those determining the role of Islam in our society."

What's worse, he writes, "Although abhorred by the vast majority of Muslims, groups like the Taliban feed off their perceived religious legitimacy. In countries like Afghanistan, extremists have long exploited a nation with widespread illiteracy by presenting themselves as the authentic voice of Islam and perverting not just the fabric of Afghan society, but the function of religion itself. They use Islam as a weapon of war. Western powers and the Afghani people have failed to wrest it from their grasp."

Ever since the 9/11 terrorist attacks, I've heard angry voices demanding to know why Muslims don't speak up about terrorism and seek solutions. It's a bogus complaint, mostly. Many Muslim leaders around the world have been speaking out and working for peace even before 9/11. Perhaps now we've reached a stage where Western leaders who think they know how to bring peace to a land scarred by war can step aside and allow indigenous religious and political leaders to take more responsibility for the future. Surely they can't fail more spectacularly than those who have been in charge for the last decade and a half-plus.

(The Aljazeera map of Afghanistan here shows who controlled various sections of the country as of this past May.)

WOODSTOCK, Ill. -- While I'm in Chicagoland, including here in my hometown, this weekend, I won't be adding the usual second item to the blog. Things should return to normal on the blog on Wednesday.