One of the many astonishing things that happened 50 years ago in 1968 was the publication of a highly controversial papal document, “Humanae Vitae,” which reconfirmed the Catholic Church’s ban on artificial birth control. 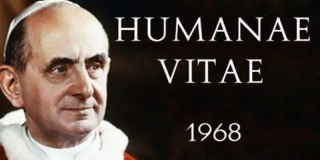 It was in many ways unexpected. Many in the church thought that, in line with recommendations from many church leaders, Pope Paul VI would adjust church teaching to allow Catholic women to use not just the rhythm method to prevent unwanted pregnancies but also birth control pills and other means.

So there was a swift reaction -- against the document and, by connection, against the church. In fact, this thorough piece from The Conversation gives credit to Catholic laywomen for reacting against a male-dominated church and taking charge of their own lives.

". . . starting in the 1940s," the story reports, "Catholic laywomen and men began to publicly discuss the church’s teaching on contraception. By the early 1960s, when the birth control pill came into common use, these questions became especially pressing. Catholic laywomen regularly wrote in the Catholic press and elsewhere expressing their views as married women and fostering a conversation that called the ban into question.

"They wrote eloquently about their marriages, their sex lives, their struggles with endless pregnancies and, increasingly, their frustration with rhythm. The only method of family limitation allowed them failed over and over again while the necessity of denying themselves sex caused rifts in couples already stressed by the care of large families."

Partly as a result of these activities by lay people, especially women, the papal birth control commission created to study the whole issue recommended doing away with the ban on artificial contraception.

When Pope Paul rejected the commission's advice and kept the ban, all hell broke loose. And, in effect, still is.

As the piece to which I've linked you reports, "Among American Catholic women, for example, as of 1955, 30 percent used artificial contraception. Ten years later, that number had reached 51 percent, all before the ban was reiterated in 1968.

What all faith communities should learn from this experience is that even though religious institutions are -- and should be -- free to set boundaries on the beliefs and behaviors of adherents, when the leaders of those institutions get so far removed from the realities of the everyday lives of people in the congregations, those leaders are likely to make bad choices and be rejected.

Religious beliefs and practices must somehow find affirmation in the daily experiences and needs of the people in the pews. When the distance between those experiences and those beliefs and practices becomes too great, something will snap. In the case of the papal document published in 1968, what snapped was a deep commitment of the people to their institutional leaders. American Catholics have in many ways been somewhat estranged from the Vatican ever since.

For another perspective on Humanae Vitae, here's a link to Fr. Charles Curran's analysis of it just published by the National Catholic Reporter. Curran teaches at Southern Methodist University.

Here's a new step in interfaith relations: An orthodox rabbi has been named the first Jewish president of a multi-faith theological seminary in California. Daniel Lehmann, president of Hebrew College in Newton Centre, Mass., has been picked to head the Graduate Theological Union in Berkeley. The more interfaith training clergy from all traditions get, the better.

The countless fans of writer Parker J. Palmer will be delighted to know that he has published a new book of essays (and a bit of poetry), On the Brink of Everything: Grace, Gravity and Getting Old. In it he returns to a theme he has approached a lot in many of his previous books (aging), but this one feels like a summing up, almost a gentle valedictory speech by someone who soon will be 80 and has come through the journey with many insights that will be helpful to others. Paraphrasing a song Janis Joplin made famous, Palmer writes, "Old is just another word for nothing left to lose, a time of life to take bigger risks on behalf of the common good." Parker, who has struggled off and on with depression, is nothing if not realistic here: "Wholeness does not mean perfection -- it means embracing brokenness as an integral part of life." And Parker is not just someone who types. He's a writer. Which means you get such fresh phrases as: "(Being able to tell the truth) comes from having my ego so broken down and composted by life that. . ." And this: "It was a hard-frozen winter day in my part of the world, and the east-facing window was filigreed with ice. Beyond the bare trees, the horizon glowed with a crimson sunrise that, viewed through the tracery of ice, turned the window pane into stained glass."