Now that we've had a few days to think through the U.S. Supreme Court's decision upholding President Trump's travel ban, let's pause and carefully consider what it meant and may mean going forward. 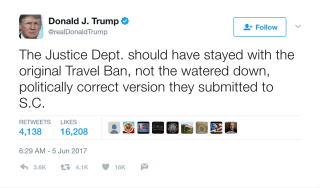 -- The court was right that presidents have broad immigration authority. Is it too broad? Perhaps. So it would be useful to do an analysis of that question and propose ways that any president can act quickly in an emergency but still allow other branches of government to weigh in to help set a rational immigration policy.

-- It took Trump and his administration three times to come up with a travel ban that, narrowly (5-4), met constitutional standards. That's an appalling record. The first two attempts were so obviously anti-Islamic in character that they shamed our immigrant nation. The third attempt seemed to be motivated by the same anti-Islam feelings that the president has often expressed, but it finally was written in a careful way that allowed a majority of the court to declare it passable. That doesn't, of course, change Trump's biased thinking or his real motivation for the ban, but our legal system did force his administration to produce something slightly more acceptable that the court could swallow. In fact, let's acknowledge that if the third travel ban had been the first and if it had not been preceded by xenophobic language that assumed all Muslims around the globe somehow were potential terrorists, any Supreme Court would have been obliged to rule it constitutional. The real question was whether Trump's rhetoric -- during and after the campaign -- was so offensive that it stained any travel ban, including this third one. The court voted 5-4 no on that question, though both sides had good arguments. Had I been on the court, I suspect I would have voted with the majority, while holding my nose, the same way I'd have voted to approve the nomination of Neil Gorsuch as a justice. More about Gorsuch below.

-- Immigration policy, despite this court ruling, needs a thorough revision. It's now up to Congress -- prodded by the people of the nation -- to come up with something reasonable and something that provides the U.S. with the security it needs. I cannot, however, foresee that happening in the current Congress. So let's change Congress so we can get to something with which we can live -- something that protects our security but honors our status as a nation that welcomes immigrants who make us a better country.

-- The court's decision noted that the Trump administration argued that the countries on the ban list "would be the most ineffective Muslim ban that one could possibly imagine." And, as Politico reported, "Roberts agreed with that argument. Though the ban applies to five countries with Muslim majority populations, 'that fact alone does not support an inference of religious hostility,' Roberts wrote, noting that those five countries amount to only 8 percent of the world's Muslim population." Indeed, Trump and Roberts were right about that. Many Americans seem not to know that the country with the largest Muslim population is Indonesia, though India, a country made up predominantly of Hindus, is a close second and soon may pass Indonesia as the nation with most Muslims. Trump has indicated he'd like a much broader Muslim ban (as his June 2017 Tweet pictured here indicates). So thank God for the courts and for public opinion to prevent his prejudices from dictating every government policy in this area.

-- The 5-4 decision was one more step in the minds of lots of Americans toward a thoroughly political Supreme Court. Had the Senate confirmed President Barack Obama's nominee, Merrick Garland, before Obama left office there would have been no chance to nominate and approve Neil Gorsuch to the court. And Gorsuch's vote was required to approve this ruling. This kind of thinking about the court as a partisan body is distressing to me. The court should be -- and historically has been much of the time -- nonpartisan. We must work our way back somehow to a Supreme Court that is above partisanship, though I fear that ship has sailed. Will a non-partisan court be one result of Justice Anthony Kennedy's retirement? I doubt it. Sigh.

-- This whole travel ban matter has been an opportunity for all Americans to learn more about the millions of Muslims in their midst and the many ways nearly all of them contribute to society. Have you done some of that learning? If not, why not?

A RELIGIOUS PRIZE TO A KING

Speaking of Muslims and how various Islamic groups get along, King Abdullah II of Jordan this week won the annual Templeton Prize for his work in promoting cooperation between and among different sects of Islam. Each year the Templeton Foundation honors someone “who has made an exceptional contribution to affirming life’s spiritual dimension, whether through insight, discovery or practical works.” Abdullah has for years been a voice of reason and moderation in Islam. Good for him.