Religious organizations are learning that the recently passed federal tax reform bill may cost them a lot of money. 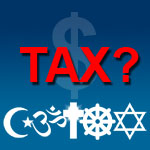 The Politico story to which I've just linked you reports that "Republicans have quietly imposed a new tax on churches, synagogues and other nonprofits, a little-noticed and surprising change that could cost some groups tens of thousands of dollars.

"Their recent tax-code rewrite requires churches, hospitals, colleges, orchestras and other historically tax-exempt organizations to begin paying a 21 percent tax on some types of fringe benefits they provide their employees."

There are good reasons that faith communities are tax exempt, except when they venture into profit-making ventures. As has been said often before, the power to tax is the power to destroy. And we certainly don't want the government destroying religious groups.

That said, it's always worthwhile to review how the tax laws work and how they affect non-profits in general and faith communities in particular. Some provisions may continue to live just because they always have and not because they are fair or make sense.

So I'm not arguing against a regular review of tax policy. But this seems to be one more case of a terrible legislative process that allowed provisions to slip in with almost no one knowing about them.

Tax law may be the worst-made (wurst-made?) sausage on the legislative menu, and it might make you sick to know how either such law or any sausage is put together. Still, both legislators and the press have an obligation to alert the public to what changes are being considered. Somehow this one slipped through with almost no notice.

Politico reports that "Many organizations are stunned to learn of the tax — part of a broader Republican effort to strip the code of tax breaks for employee benefits like parking and meals — and say it will be a significant financial and administrative burden."

There may well be good reasons to get parking and meal deductions out of the tax code, but not without some thought as to how it will affect both private companies and non-profits.

Does your faith community know about this? If not, please share what I've posted today. And please ask your members of Congress how they let this happen and what they intend to do about it.

POLAND STARTS TO COME TO ITS SENSES

There's a bit of good news from Poland. Lawmakers there are backing away from a recently passed terrible law that made it illegal to blame Poland for the Holocaust. At least, as Reuters reports, they have voted to "remove parts that imposed jail terms on" people convicted of that. Germany, of course, was responsible for the Holocaust, not Poland, where the Nazis built six of their death camps. But not all Polish hands at the time were clean. Because it's a complicated story, the law making it a crime to suggest Poland was complicit in Nazi crimes was really problematic. Good step, lawmakers.

After writing an important and wonderfully helpful book for adults about the parables that Jesus told (Short Stories by Jesus), Vanderbilt scholar Amy-Jill Levine has joined with a rabbi named Sandy Eisenberg Sasso to write books about them for children. Their lovely little book Who Counts: 100 Sheep, 10 Coins and 2 Sons, I reviewed here last year. Now they've combined with artist Margaux Meganek to write The Marvelous Mustard Seed, retelling the story Jesus told about how big, important things can grow from small, seemingly unimportant things. The words are simple and the story is as engaging as when Jesus first told it. Besides that, the art is simply wonderful. At the end of the book is a helpful note to parents and teachers about parables and even about mustard itself. "Parables," they write, "were not originally allegories, with every element of the story containing secret meaning. Parables can open up our imagination, if we let them." Christian and Jewish (and other) congregations would do well to have this book's universal story available to read to their children.