Soon after I began dating the woman I married almost 22 years ago, I met someone who was quite active in her church, St. Michael and All Angels Episcopal Church at 67th and Nall.

Larry J. Bingham and his wife Ann were members of a study group into which I married. It was quickly clear that Larry was a deeply thoughtful theologian, though he wasn't ordained as either a pastor or a deacon. And it wasn't just that he was well read and articulate. He was a gentle man who in all kinds of ways lived out his faith and made room for others who had different approaches than he did.

For the last several months Larry and his friends, including my wife Marcia and me, have been walking with him through a cancer diagnosis. It was no surprise that Larry's focus wasn't simply on living as long as possible but, rather, on making sure that whatever treatments he was willing to undergo might help doctors learn more about cancer so that others later might benefit from Larry's experience.

All of us hoped that Larry, co-founder of the Seigfreid Bingham Law Firm, would beat this disease. And he tried his best, though in the end cancer took Larry on Father's Day. So over this past weekend we became part of a standing-room-only crowd at St. Michael's to memorialize Larry and say farewell.

There were lots of great Larry stories told there with his widow, his children and grandchildren present.

But I think my friend Monte Giddings, archdeacon of the Episcopal Diocese of Kansas, captured something central not just to Larry's life but to healthy faith communities generally.

Monte said that if all lay people lived the way Larry did there would be no need for clergy. 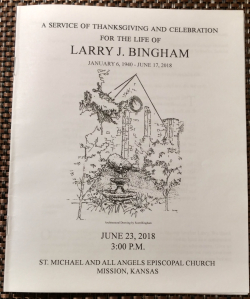 Well, in some ways Monte was stretching a point, particularly for the Episcopal tradition that places high value on the role of clergy. But he highlighted the central role that each person of faith can and should play in a faith community. Churches, synagogues, temples, mosques and other houses of worship simply cannot exist without deeply committed people who not only make their congregations function well but who demonstrate what it means to act in the world as if they believe what they profess to believe.

Larry did exactly that. He loved his church and his denomination, though he was quite willing to call it on the carpet when it needed to be and to seek to get it to change. Monte described Larry as the model layman. I agree, but I also think Larry would agree with something that the Rev. Jan Edmiston, a Presbyterian pastor, once said in my presence: If you've been baptized, you're no longer a lay person.

That idea is in harmony with what we Protestants often call the "priesthood of all believers." In that sense, Larry was a priest, one who called all the rest of us to that vocation, no matter what our tradition.

Leaders at the final rally of the renewed Poor People's Campaign used it to encourage people to continue the effort to alert the nation to the plight of people in poverty and to work to alleviate conditions. I hope all this makes a difference. Let's check back in a year and see whether it did.

P.S.: Recently I wrote here of the ways in which Attorney General Jeff Sessions misused chapter 13 in the book of Romans to justify abhorrent government policy. In that post I quoted Pauline scholar Mark Nanos. Yesterday Mark shared with me this excellent review of this issue written by a professor emeritus of New Testament at the Phillips Theological Seminary. Give it a read if the topic continues to interest you.