Home Archives Profile Subscribe
Who are evangelicals and what's their history? 6-20-18
A government proposal to reform Islam: 6-22-18

Earlier this week I wrote here about the fears that historically have influenced how some evangelical Christians think and behave. 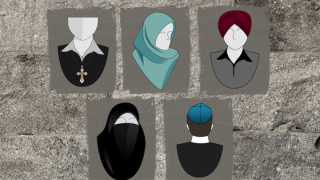 Today I will tell you about people of faith who have become targets in New York City, no doubt because of the irrational fears others have about them, fears rooted in ignorance, which often is self-inflicted.

Buzzfeed reports here that a "new study on the experiences of Muslim, Arab, South Asian, Jewish and Sikh New Yorkers found rampant physical and verbal harassment" in the last couple of years.

There is no data on who is doing the harassment, so let's not go blaming this or that group of people.

But it is disheartening to know that if you appear in public in some kind of religiously associated garb the chances improve that you will be targeted -- at least in New York and almost certainly in other cities, too.

The survey was released by the New York City Commission on Human Rights.

As Buzzfeed reports, some of the survey's findings include:

Every single one of those actions violates primary teachings of the world's great religions. So if the people committing these acts are also people of faith they clearly don't understand their own traditions or they willfully choose to violate its tenets.

But no matter where these things occur and no matter whether observers are people of faith, everyone has an obligation to try to stop such harassment or to enlist law enforcement authorities to intervene.

(The illustration here today came from this Atlantic site.)

WORRYING ABOUT WHERE SCIENCE MAY LEAD

Francis Collins, who ran the National Institutes of Health for several years, says science is beautiful and revealing but we must be careful about where biotechnology might lead: “There are scientific concerns. There are safety concerns. There are huge philosophical and theological concerns.” He's right. Let's proceed under a caution flag, a yellow light. Carefully. Morally.