CINCINNATI -- While I was here this past weekend for the annual conference of the National Society of Newspaper Columnists, I had with me a book that I'm reading for review, Believe Me: The Evangelical Road to Donald Trump, by John Fea. (I'll publish my review here on the blog a bit later.) 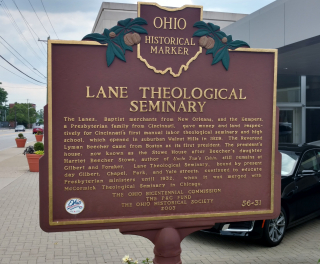 And in it I ran across the name of a divinity school in Cincinnati of which I'd never heard -- Lane Theological Seminary. Fea, in describing the many fears that have plagued evangelicals across American history, notes that "Lyman Beecher, a well-known New England Congregationalist minister, became the first president of Lane. . ."

So I started hunting around (first online; later on the ground) and discovered -- first on the Wikipedia entry on Lane to which I've linked you above and then on this Ohio History Connection site -- that Lane was founded in 1830 and operated for 102 years before, finally, being merged into McCormick Theological Seminary in Chicago. 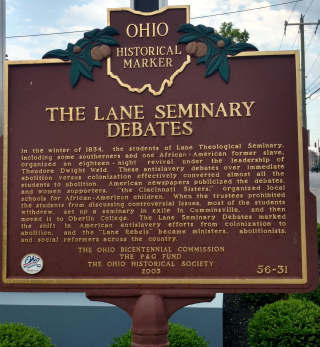 The last buildings occupied by Lane in Cincinnati eventually came down -- the last one in 1956. And in its place, in front of a Cadillac dealer, is a two-sided sign, photos of which you see here, that describes Lane as well as a great debate there over slavery and abolition before the Civil War.

All of which was another reminder to me (and now to you) of how every city in the country bears the marks of the ways in which religion has helped to shape its history -- as well as its present. When I visit cities in which I've previously never spent much time, I love to wander around and look for evidence of exactly that.

One of the other religious sites I visited here was Christ Church (Episcopal) Cathedral (pictured below), where the Rev. Gail Greenwell is dean. She and her husband Jim are good friends of my wife and me. We met them when she served here as rector of St. Michael and All Angels Episcopal Church at 67th and Nall. In fact, we spent our last night in Cincinnati as guests in Gail's and Jim's downtown home, not far from the cathedral.

That cathedral is huge and, last year, celebrated its 200th anniversary. It's quite an amazing space, from which the congregation does a lot of excellent ministry.

So next time you're in a city you don't know well, wander about and see how threads of religion are woven into the social fabric. Feel free to send me pictures. We both might learning something. 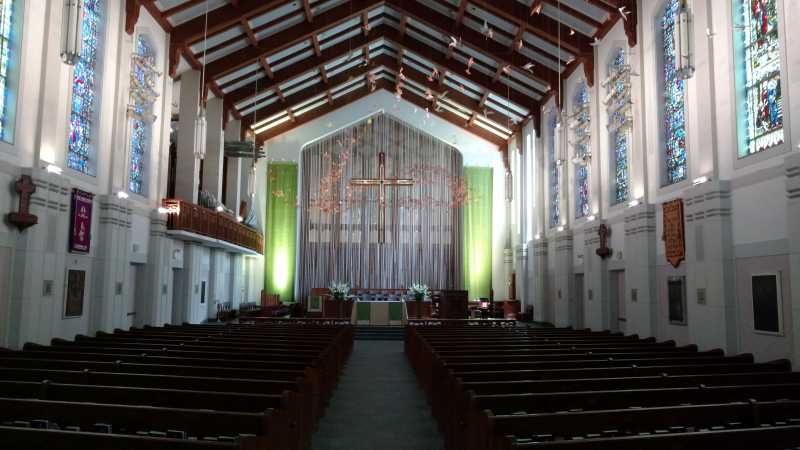 What does God look like? (That's a dumb question, by the way, for many reasons.) Researchers at the University of North Carolina, nonetheless, asked some 550 Christian people that question and found some odd answers. But mostly the people they asked indicated that "God is white, young and clean cut, not unlike someone from an '80s boy band." And let us guess: His name is Rob? Or Stu? Or maybe Ian? Perhaps these Christians don't know that the Bible says God is spirit. And perhaps they don't know that the best Christian answer probably is this: "Whatever Jesus looked like."