Quite a few years ago, a Jewish friend loaned me a book called Ethical Wills and How to Prepare Them, first published in 1993 with a new edition in 2015. 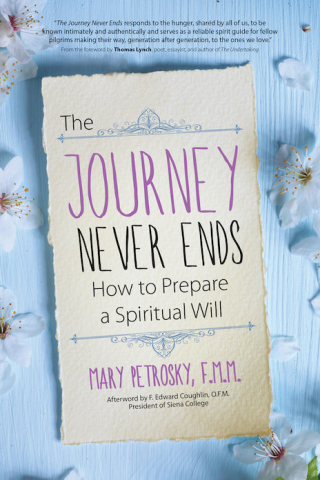 It described how to write something to whom you wish to leave not your valuables but your values. I liked the idea so much that I adopted and refitted it a bit and have used it in several classes or seminars.

In fact, this November I'll be using the idea again when I speak at a wrap-up event at my church, which has created a series of classes to help prepare people for end-of-life decisions.

I have called the writing that I urge people to do spiritual wills.

Well, I now have an excellent new resource to use when I lead such discussions. It's a small book called The Journey Never Ends: How to Prepare a Spiritual Will, by Mary Petrosky, a psychiatric social worker who is a member of the Catholic religious order called the Franciscan Missionaries of Mary.

Sister Mary writes that the question she wants each of us to think about is: "What do I want to leave behind? Is there something about me, about my life right now that could encourage, challenge or maybe even bring a smile, a laugh or a prayer to the lives of others? Is there something of my life at present that might inspire, amuse or challenge my loved ones, friends, coworkers, neighbors, and in so doing help them to recognize that I found purpose and meaning?"

She describes a spiritual will this way: "Expressed in your unique, personal voice -- not in legalese -- a spiritual will concerns who you are and who you have become over the course of your life: your values, interests, experiences, relationships and perhaps your faith. Much more than an accounting of your earnings, your stuff, a spiritual will articulates your deepest values for your loved ones to remember you by."

When I lead a session on spiritual wills, I try to make clear that the form of the will is up to whoever writes one and that people have the freedom to write one will for everyone or a separate one for different people. Spiritual wills often are done in the form of a letter, but it can include poetry and lists of values and lessons that have been meaningful to the writer.

Spiritual wills can be especially helpful for people who are now outside of an established faith community because they allow them to pass along spiritual guidance that may be important to them but that one wouldn't find in any particular religious creed.

Over the years I've been blessed to read some beautiful spiritual wills. (And there are samples in this book, along with some suggested outlines of wills.) But the point is not that you have to be a great writer. The point is to be you and to say things in your own voice.

I'll be adding this little book to my list of resources to draw on for when I teach about this in the future. And I'd certainly recommend it as a great place to start the process on your own.

Well, the U.S. House chaplain, recently forced to resign, has his job back -- at least for now. I've lost count, but I think that makes Father Patrick Conroy third in line to be President Trump's White House communications director, a job that eventually all of us will have to take a turn filling.