Home Archives Profile
Some occult and magical influences in our politics: 5-11-18
Why you need more than one Bible translation: 5-14-18

Let's think about miracles this weekend. 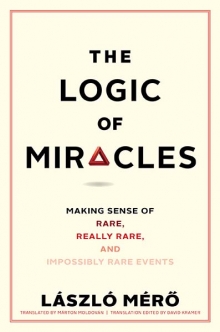 The flip side of that view comes from the great humorist Elbert Hubbard, who once offered this definition: "A Miracle: An event described by those to whom it was told by men who did not see it."

Into this mix now we add László Mérő, a professor at the Institute of Psychology at Eötvös Loránd University in Hungary, whose new book from Yale University Press is The Logic of Miracles: Making Sense of Rare, Really Rare and Impossibly Rare Events.

It's quite an intriguing book, full of discussions about happenings people might consider miraculous and the astonishing rarity of those happenings.

But if you are looking for a definitive answer to the question of whether there is divine intervention to create what many people would consider miracles, you won't find that here. And although that may be disappointing to some readers, I frankly was relieved that this books was not an apologetic for divine intervention. Such books tend to be too facile.

For Mérő, "miracles encompass phenomena that deviate from the laws of nature as currently understood by science (italics his)."

Therefore, he writes, "transcendent miracles are honest-to-God miracles in the strongest sense of the word. There is no science, mathematics or statistics to explain their existence, although for a person of faith, such divine manifestations seem explainable enough. I, however, being of a scientific frame of mind, shall not distinguish such manifestations from what I am calling true miracles, and I shall leave aside entirely the question whether there are in fact transcendent miracles or whether science will eventually be able to explain every single miracle. One thing is certain: science will have a hard time explaining genius."

Still, Mérő says that "miracles exist in our world." But if they do, he writes, "it means that they should, in theory, be accessible to scientific study. But how are they to be studied if what makes them miraculous is exactly that they are one-time events and thus by their nature irreproducible, and unreachable by scientific analysis?"

Mérő is reluctant to come up with a locked-in-stone definition of miracles, save to say that each is "a one-time, unpredictable and irreproducible event."

There's lots of math and statistical speculation in this book in the confines of two made-up countries -- Mildovia and Wildovia, which Mérő calls "the mild world and the wild world." And all of that is kind of fun and engaging.

But, as I say, this is not a book that will describe a series of alleged divine interventions and then argue that they are the result of God's choice to respond to prayer, perhaps, or to respond to God's own desire to make something happen.

And yet Mérő does get readers thinking about how our world is both ordered and odd, predictable and whimsical, fathomable and at least temporarily unknowable.

All of which should encourage the Benedictine virtue of humility among us, though it rarely seems to.

MORE EXAMPLES OF FAILURES TO LISTEN TO THE WOMEN

As we have moved through this painful time of a sharp focus on sexual harassment of women by various public figures, people of faith have not been excluded from the story -- nor should they have been. Just the other day, the president of Southwestern Baptist Theological Seminary in Fort Worth, Texas, issued a statement entitled “An Apology to God’s People.” The RNS story to which I've linked you said the statement was in response to a previous video in which (Paige) Patterson said he considered it unbiblical to recommend divorce, even in cases of domestic abuse. (Notice, however, that Patterson seems to apologize for the pain his words caused but he doesn't retract his views.) In another story of abuse of women, elders at the megachurch outside Chicago where Bill Hybels was the highly visible founder and leader for years now are apologizing to women for not taking seriously their allegations of misconduct against Hybels. Any culture that imagines women are less valuable than men inevitably will put at risk half the population. Faith communities have as much to answer for in this regard as the rest of society.