The ways in which Russia, under the direction of Vladimir Putin, interfered in our 2016 presidential election -- and appears poised to continue its cyber attacks both here and around the world -- have produced lots of outcries from lots of political sources. 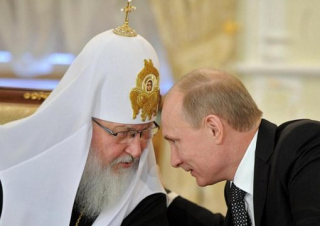 But what has escaped much notice -- especially in the U.S. -- is the way in which the top leadership of the Russian Orthodox Church has aided and abetted the criminal Putin regime.

This First Things column, however, takes that church's moral collapse head on. It's by the well-known Catholic writer George Weigel, and is a good example of speaking truth to power, which is exactly what Weigel accuses Kirill, the Russian Orthodox Patriarch of Moscow, of not doing. (Kirill and Putin are pictured here, perhaps calling plays in a huddle.)

Weigel begins by quoting an address by Kirill last December after Putin spoke to a meeting of the church. Kirill concluded this way:

There is nothing more serious and important than moral consensus within society. If there is consensus on the main moral values, then all other social relationships are formed harmoniously … and political practice corresponds to the interests of the people. …

I express my gratitude to you for the dialogue we hold together … and for the atmosphere of openness in which our society lives today. I believe that this openness will be the pledge for the certain success of our Fatherland in the near and distant future. …

I would like to wish you, much esteemed Vladimir Vladimirovich, long years of life, good health, and God’s aid in the lofty mission the Lord has entrusted to you through the will of the people ... May the Lord preserve you!

Then Weigel lets loose. An example or two:

"Does the 'political practice' rooted in 'moral values' to which the patriarch referred include the assassination of Putin’s political opponents, such as Boris Nemtsov? Or the murder of his critics, like journalist Anna Politkovskaya? Or the poisoning with radioactive polonium of Alexander Litvinenko, who tried to shed light on Putin’s secret police thugs? Or the recent use of a weapons-grade nerve agent in England against two Russians of whom Putin disapproved?"

"Why doesn’t the 'atmosphere of openness' in which Russian 'society lives today' extend to Alexei Navalny, the brave dissident who was not permitted to run in last month’s presidential election? How is that 'atmosphere of openness' affected by 24/7 state-sponsored propaganda inside Russia, which depicts Vladimir Putin as the one man who can save the country from Western aggression and domestic traitors?"

We have seen many times across history religious leaders climbing into bed with political leaders whose moral center has simply disappeared. We saw it in Germany in the 1930s, when many (though not quite all) church leaders jumped aboard Hitler's bandwagon. And we've seen it in our time when white Christian evangelicals abandoned their core beliefs to support Donald Trump, whose life defies almost everything those evangelicals have stood for. (I am not, please note, comparing Trump with Hitler. Rather, I'm comparing many German people of faith in the 1930s with some American people of faith today.)

And now we see it in Russia. May the Russian Orthodox people take careful note of what is being done in their name and hold Kirill accountable.

Although the Church of Jesus Christ of Latter-day Saints -- the Mormons -- continues to grow in the U.S. and around the world, the rate of growth is slowing, especially in the U.S. And yet imagine how many Christian denominations would be thrilled to have added more than 1 million members since 2013. By the way, there now appear to be slightly more Mormons in the world than Jews. And the Mormon total of about 16.1 million exceeds the global figure for the United Methodist Church of about 12 million.

The Character of Virtue: Letters to a Godson, by Stanley Hauerwas. Starting on the day of his godson's baptism in October 2002, theologian Stanley Hauerwas of Duke Divinity School has written an annual letter to the boy, Laurence Bailey Wells. Each letter takes a look at some virtue that Hauerwas wishes to recommend to his godson. Now they've been collected in this lovely little book, which has an introduction about godparenting by the father of Laurence, Samuel Wells. Hauerwas, as he has demonstrated time and again over a long career, is a fine writer and a better thinker. If you want to sample his work, I recommend starting with his 2010 book, Hannah's Child: A Theologian's Memoir, which I wrote about here back then. In this new book, Hauerwas, who promotes pacifism, again and again describes what a difficult religion Christianity is to follow faithfully. For instance, he tells his godson this: ". . .I do not wish you will have an untroubled life, but I hope the troubles you confront will be those made necessary by your being made a member of the Body of Christ." The implication is clear: If you are a true disciple of Jesus, you will run into regular trouble by speaking out against evil, by protecting the vulnerable, by standing with the ones whom powerful systems oppress. It's worthwhile trouble, for sure, but it's trouble nonetheless. As Hauerwas promotes the value of kindness, truthfulness, friendship, patience, hope, justice, courage, joy, simplicity, constancy, humility (and humor), temperance, generosity, faith and character, he also gives some of himself to his godson -- and, by indirection, to us. It's a gift well worth receiving.