A Cambodian genocide survivor tells her story to Jews: 4-16-18

One recent Friday evening I attended a Shabbat service at Temple Israel of Greater Kansas City and heard these words shared in the worship liturgy: 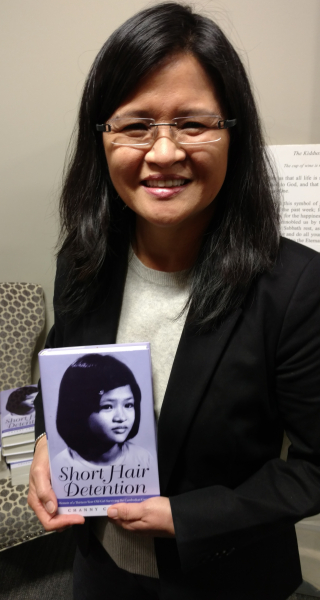 "The Eternal One was with us during the long years of oppression. Our faith sustained us even when our people suffered the deepest anguish."

It was, of course, impossible not to think of the murder of six million Jews in the Holocaust when those words echoed through the congregation. The Holocaust was a unique and uniquely evil genocide. It was not, however, the end of genocide. The speaker that evening was there to describe living through the Cambodian genocide in the 1970s when she was a teen-age girl.

It is one of the remarkable traits of many Jewish people today that they consistently and persistently recognize, learn about and speak out about genocide, perhaps as a way of continuing to remember their own "long years of oppression."

So the congregation had invited Channy Chhi Laux (pictured here) to talk about her experiences in Cambodia, as described in her new book, Short Hair Detention: Memoir of a Thirteen-Year-Old Girl Surviving the Cambodian Genocide.

She was part of a large, modestly well-to-do family in Cambodia when the Khmer Rouge seized control of the nation and almost destroyed it. Under the direction of leader Pol Pot, the Khmer Rouge regime took actions that resulted in the death of roughly two million people.

This Marxist-communist band of thugs forced people out of the cities and into the countryside to work in the rice paddies. Channy and her family were among them.

They had to leave their town and relocate to a rural area where every aspect of their lives was controlled: "They turned the whole country into a big, giant concentration camp," she told the T.I. congregation.

As she described it that evening, she usually worked 12 hours a day with no lunch: "Everybody was starving."

Worse, there seemed to be no end in sight to the suffering. She mentions in the book the several times she went to bed and hoped and even prayed that she wouldn't wake up. And she told the T.I. congregation that "I lost hope for anybody to come help us."

The title of the book, by the way, is based on the Khmer Rouge rule that it was a crime to have your hair long enough to touch your shoulder.

The full story of her survival is in the 550-page book, but I asked her how Cambodians today seek to remember what happened in the 1970s so they don't forget and somehow let it happen again. Her answer was disturbing:

"Today Cambodians don't want to talk about it." And, in turn, "I still can't bring myself to visit. Writing a book is, for me, my healing."

Channy came to the U.S. in 1979, unable to speak English. But she attended high school in Lincoln, Neb., earned two undergraduate degrees and a master's degree and worked as an engineer in the biotech and aerospace industries for three decades.

Today she is the chef and owner of a Cambodian food business called Angkor Cambodian Food in Fremont, Calif.

She says that when she was living under the Khmer Rouge, she had a "love-hate relationship with God." She honors her Buddhist roots but now has been baptized as a Lutheran in part because of the help Lutherans gave her and other family members when they came here as refugees.

Later, I spoke with Channy by phone about her connection to Lutheranism and her trip toward that tradition from growing up Buddhist.

"I grew up in a family that looked at every religion as an opportunity to learn to be a better person," she told me. So she's kept some of her Buddhist background, has embraced Lutheran Christianity, still does traditional prayers to ancestors and also attends a Catholic church on occasion. And her husband grew up in a Christian Science family, though his mother now is a Presbyterian.

"We're very open," she says of her and her family, which includes a son and daughter in their 20s. God, she says, reveals who he or she is to humans "based on our limitations."

It says something profoundly sad but also hopeful about humanity that 70-some years after the Holocaust, the survivor of a different kind of genocide would share her survival story with a Jewish congregation in what was obviously a sense of solidarity in the face of the worst kind of evil possible at the hands of other humans.

May the day arrive when the last genocide was so long ago that there are no living witnesses left, only deeply ingrained history lessons -- and memorable words of worship liturgy -- that prevent another one from ever happening.

One by one, the people whose survival stories Rabbi Jacques Cukierkorn and I tell in our 2009 book, They Were Just People: Stories of Rescue in Poland During the Holocaust, are dying. A few days ago, we learned of the death of Aaron Elster, who survived the Holocaust in Sokołów Podlaski, Poland, by hiding in the same house with his sister Irene (though they were almost never allowed to see each other). I have linked you in the previous sentence to a Chicago Tribune story about Aaron's life and death. From that story, here's a quote that reveals the generous and educational way Aaron chose to live after World War II: “'I revered him,' said J.B. Pritzker, immediate past chair of the Illinois Holocaust Museum & Education Center in Skokie (which Elster served as first vice president) and Democratic gubernatorial candidate. 'He was a leading light in the building of the Illinois Holocaust Museum. He was there from the beginning, before there was even a plan for the large museum that we ended up building,' added Pritzker, noting that 'it could not have been done without him.'” Aaron gave many, many talks about the Holocaust, especially to children. As we report in the book, Aaron told us that when he speaks to students he reminds them that Hitler came to power through the vote. "He didn't come in there with tanks and an army. The general population stood by and let it happened. Nobody wanted to get involved. So I warn children that the burden is on their shoulders because they're going to be the decision makers in the future." Exactly, Aaron, exactly. R.I.P.

Ten Poems for Difficult Times, compiled (and with commentary) by Roger Housden. This is another in Housden's "Ten Poems" series, and was triggered by the election of Donald J. Trump as president. "Like half the country," the author says, "on the day after the election I was wondering how I might respond personally to what seemed to me to be a dangerous turn in the American political landscape." While he was out for a walk, the idea of this book as his answer came to him. It contains some terrific poetry -- some of which may be familiar to you, including poems by Conrad Aiken, William Stafford, W.S. Merwin and Wendell Berry. Other poems almost certainly will be new to you, including the opening one by Maggie Smith, "Good Bones." Here's my suggestion for how to read this book: Read each poem first before you read any of Housden's commentary about them. The poems should mean something to you before you know what they might mean to Housden. Then, if you're up for the commentary, dig into it. I found some of the commentaries longer than they needed to be, but perhaps that was because I didn't follow my own advice about reading just the poems first. In ways that prose can't, poetry can engage our emotions and our spirits. That's what makes the poetry in this collection so valuable.