As church attendance declines -- as it mostly has been doing in the U.S. since the 1960s -- many churches are trying to figure out whether they can survive and, if so, whether they can maintain their church building. 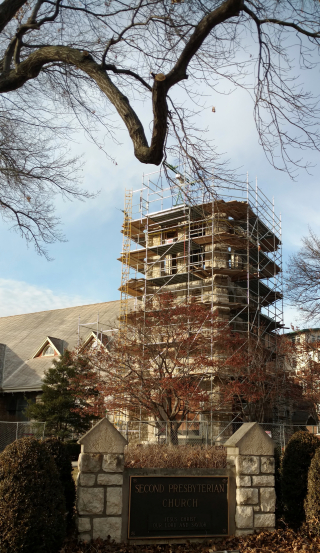 My own congregation, Second Presbyterian Church, has been thinking about the future of its own large and beautiful building at 55th and Brookside, and is at the start of making building changes thanks to a successful $2.6 million capital campaign.

You can see in this photo the work we're doing on our iconic tower, but a major thrust of what we will do in the building is to make the space more open and more available not just for members of Second but also for the surrounding community.

In the end, we hope to make it not just sacred space for worship but also a community center.

That's exactly the journey that is described in this story about a church in West Philadelphia.

That church, built in 1906, had run into terrible times. As the story notes, "By the mid-1990s, the church's turn-of-the-century architecture, which houses beautiful woodwork, a world-class organ, two stained glass domes, and two of the largest signed Tiffany windows in the Delaware Valley, was falling apart. The ceiling in the sanctuary and the chapel was leaking and falling down. The heater was beyond repair. The bathrooms weren't even working."

By contrast, "Today, the church's community center is a place where people gather for AA meetings, book clubs, and even the occasional birthday party."

And it's also still a church used for worship services.

Perhaps you're aware of a group in Kansas City that tries to help save such sacred space. It's called Friends of Sacred Structures and it does terrific work, though the demand for help almost always exceeds what it can do.

Almost every community across the U.S. is dotted with sacred spaces. And they're important to the social fabric. Whether they can adjust to be more available as community spaces may determine whether they'll survive at all.

COULD THIS FOOL MAKE IT TO CONGRESS?

A Holocaust denier will be running unopposed as the Republican candidate for Congress from a district in northern Illinois. I was born in -- and mostly grew up in -- northern Illinois. It makes me sad that this is the best the GOP can do there. At least the party's officials have denounced the guy. Let's hope the voters do the same.

Lenten Healing: 40 Days to Set You Free from Sin, by Ken Kniepmann. As Christians enter the season of Lent a week from today on Ash Wednesday, they will find many different kinds of daily devotionals and other guides to help them. Amazon.com has grouped a stack of them together here. The book I'm mentioning here today is from the Catholic publisher Ave Maria Press and, as you might expect, reflects Catholic tradition and practices. But its approach is easily adaptable to other branches of the faith. The author, part of the John Paul II Healing Center in Tallahassee, Fla., organizes the book, as he says, "around four Sevens: the Seven Deadly Sins, Seven Contrary Virtues, Seven Deadly Wounds and Seven Signs of Healing." It's an interesting way to approach the opportunity for reflection that the Lenten season always offers to adherents of Christianity. If you've never used a Lenten devotional guide before, perhaps this will be the year to give that a try.