Many of us who are old enough to remember the Little Rock Nine and their efforts to desegregate Central High School in Little Rock in 1957 have, over the years, had a lot of respect for the nine African-American students who were subjected to hatred and violence from the white supremacists who were almost everywhere in Arkansas at the time. 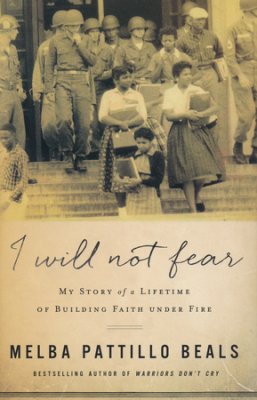 But the details of that traumatic time in their lives and what happened later sometimes get lost.

Which is why I'm glad I just read a new book by one of the nine, Melba Pattillo Beals, called I Will Not Fear: My Story of a Lifetime of Building Faith Under Fire.

Her account not only of the vicious racial prejudice she experienced as a teen-ager but trauma after trauma in the rest of her life makes it difficult to comprehend how she has emerged as a highly educated and accomplished journalist, author and person of deep Christian faith. Many people who have gone through just half of what she's gone through have wound up beaten and living desperate lives.

God is everywhere in this story. As is Beals' beloved grandmother, who taught her to trust God in all circumstances. At times, in fact, it's all a little overwhelming for the reader, so you can imagine what it must have been like for Beals to live through not just the effort to desegregate Central High but so much violence and threats of violence that she was sent to live with a white family in California.

Then there was marriage to a white man. Then their still-born son. And a divorce. A difficult birth of a daughter. And adoption of two biracial sons. And an award-winning journalism career. And her sons being the target of abusers. And getting a doctorate degree while struggling to put food on the table. And illness. And on and on.

Until, finally, President Bill Clinton presided at a ceremony at which she and the other members of the Little Rock Nine were presented with the Congressional Gold Medal.

At the very start of the book she tells us that "Growing up in the 1940s and '50s in Little Rock, Arkansas, I needed a powerful God and every drop of faith I could muster and sustain to hope that one day I would be free of the imprisoning bars of segregation."

And on nearly every page that follows, we find her praising that God and crediting divine oversight for keeping her safe and getting her and her family through one horrible scrape after another.

The day, for instance, in which she and others were being chased away from Central by a racist mob, she cried out to God and, she believes, received the necessary help to escape: "There was no doubt in my mind that God had heard me. It was the first time God became real in my life. He was no longer words on the page of a hymnal and in the Bible. He was real, alive and demonstrating His love for me."

The theology expressed here is deeply personal. At times readers may wonder whether she attributes things to God that were merely coincidences. Who is to know? What is clear is that she has a deep belief that God walks with her closely every day.

WHAT THE POPE GOT WRONG AND RIGHT

Pope Francis has apologized for remarks he made in Chile about sexual abuse and his defense of a bishop there. An apology was necessary. His initial remarks were snippy and uncalled for. However, his defense of the bishop remains strong -- perhaps stronger than it should be. No one wants to see an innocent bishop or priest punished, but the pope's job here is not to insist that the bishop is innocent. Rather, the pope's job is to insist on a thorough investigation so that everyone can agree on whether he's innocent or not.