More than 15 years ago, religion scholar Diana Butler Bass published Strength for the Journey: A Pilgrimage of Faith in Community, and it helped Americans understand not only the decline of Mainline Protestant denominations but also why people like her have stayed connected to church. 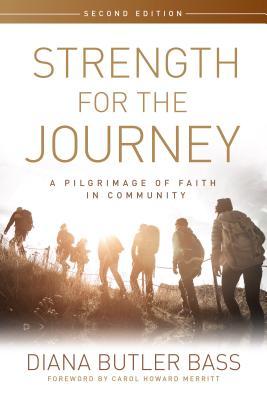 It was -- and remains -- a helpful and enlightening read.

And now it's back in a new edition with a foreword by religion writer Carol Howard Merritt and an afterword by Bass herself.

In some ways the ground has shifted in a decade and a half, but what Bass provides here continues to be insightful and to offer guidance to anyone seeking to understand the contemporary American religious landscape.

In the new ending to the book, Bass describes a speech she gave at a session of the Parliament of the World Religions in 2015 in Salt Lake City. She talks about being at her local Starbucks, where her favorite barista is a young Muslim woman.

But Bass noticed one day that the woman was wearing a bright green hijab (head scarf) instead of the black one she'd always seen her wear. Asked about it, the woman said she had been told that the rules require she wear black: "But I didn't believe it. So, I looked it up myself. I don't have to wear black. I can wear any color I want."

What mattered for that woman and for women of all religious traditions, Bass writes, is that "she had searched the 'rules' for herself, not listening to someone else's interpretation, but reading the text on her own. . .Women with the power of words can change the world."

Well, Bass herself has the power of words, and in this book she uses them to tell about her connection with eight different Episcopal parishes over two decades. Each is dealing with different issues but each provides an opportunity to learn how to respond to the new religious reality in the U.S., where roughly 25 percent of adults now identify as religiously unaffiliated.

It's a new day in the U.S. in terms of faith, and it's helpful to return to this book to see where we've come since then and what we can learn from her journey.

WHAT WILL DETERMINE THE ALABAMA ELECTION?

No one really knows how the vote Tuesday in Alabama for a U.S. Senate seat will turn out. But as this RNS story makes clear, the result may depend more on whether African-American voters turn out to support Democrat Doug Jones than whether enough people abandon Republican Roy Moore because of the allegations against him of sexual misconduct. Blacks have many reasons to vote against Moore beyond those allegations. And they have several reasons, some involving church life, to support Jones.

P.S.: My latest National Catholic Reporter column -- about a Christian response to the disgusting series of revelations about sexual assault in the news -- now is online here.