I have always found it intriguing that the Christian Bible -- which begins with the Hebrew scriptures, though it puts the books in a different order -- shows humanity starting in a garden in Genesis and ending up in a city -- the New Jerusalem -- in the book of Revelation. 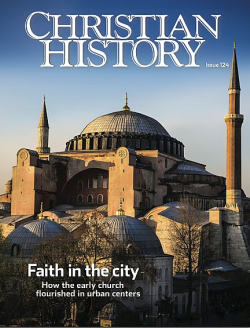 That journey says something about the relational nature of the faith. In fact, Christianity is most in balance when it keeps a creative tension between what I sometimes call "Me and Jesus in the Garden" hymns and theology and theology that emphasizes the covenant community of which individuals are members. The more crowded the environment, the more need for relational theology.

Christian History magazine, a terrific publication, has a new issue out called "Faith in the city: How the early church flourished in urban centers." In fact, you can download a pdf version of the issue for free. And if you want to sign up as a subscriber, that's done on a donation basis.

Cities, of course, were where early followers of Jesus found the most people to invite into the faith. As managing editor Jennifer Woodruff Tait notes in the front of this issue, "From Jesus' small group of early disciples, the Christian movement grew within 350 years to 56 percent of the population of the (Roman) empire." (It certainly didn't hurt that the Emperor Constantine, apparently for both religious and political reasons, eventually converted to Christianity.)

The movement did not, as we know, separate itself fully from Judaism for quite a long time (in some places, it took more than a century), so if by "Christian movement" she means full-fledged Christianity, the term is anachronistic.

But it was in large cities that the Jesus Movement found most of its converts.

As Joel C. Elowsky, professor of historical theology at Concordia Seminary in St. Louis, writes in this issue: "From their first headquarters in the holy city of Jerusalem, to their future Western hub in the imperial city of Rome, the apostles' mission was an urban one."

Christianity today certainly has a place in rural areas both in the U.S. and around the world. In fact, often churches in rural America are the social (and theological) centers of the surrounding communities.

But the robust nature of the faith makes it feel quite at home in the world's urban areas. I'd be interested in reading a report by a religious scholar on whether that is especially true of other faith traditions as well.

THE FLAW IN THE PRO-MOORE SUPPORT

The election for a U.S. Senate seat is today in Alabama, and it may be too late to convince evangelical Christian supporters of Roy Moore that they're being hypocritical beyond belief, but this column by an evangelical teacher tries to convince them of the error of their thinking. I hope some voters will have read it and adjusted their voting plans accordingly.