When what eventually became the Christian church got its start as a branch of Judaism, followers of Jesus met and worshiped in homes, generally around a festive meal. 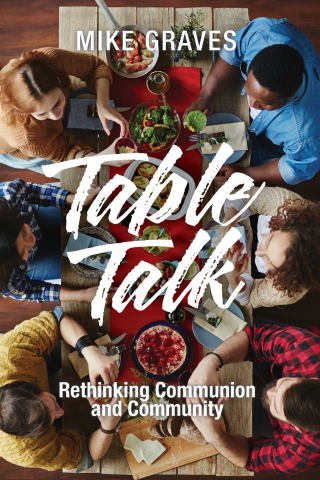 Mike Graves, who teaches at St. Paul School of Theology and who serves as scholar-in-residence at Country Club Christian Church, thinks Christians ought to return to that practice.

What happened as the church matured, he writes in his new book, Table Talk: Rethinking Communion and Community, is that the original celebratory meal became the more dour practice of Communion (also called Eucharist or the Lord's Supper) and the full meal, which included sacred bread and wine, got reduced to bread and wine only.

Those original feasts, he writes, "were mostly inclusive, breaking down barriers of gender and socio-economic status." Beyond that, they were "festive joy." And "after dinner everyone participated in lively conversations over wine, the key being not how much alcohol was consumed but how everyone could participate in the dialogue."

What Graves is proposing in this fetching new book is the concept of "dinner churches," which I wrote about recently in this Flatland column. In fact, I quoted Graves in that column and mentioned his forthcoming book, though at the time it had a different title.

Graves says that by omitting the festive feast and replacing it with a quick Communion service, the church today is missing "what took place in those first-century gatherings (which) resonates with the very nature of God and the gospel itself -- intimacy, inclusion, festive joy and participation in the community."

As he notes, "A small bite of bread and two ounces of Welch's grape juice does not constitute a meal."

His solution: "Let us eat together in our churches the way we would eat in our homes when entertaining friends and guests. Church as a dinner party. Think about that for a moment."

Yes, there are practical matters to work out to make that change, including whether it's possible to serve the kind of sacred meal Graves recommends in the typical church sanctuary. And how to transition from a re-enactment of the Last Supper with all its deep theological meaning to a standard meal. But he insists there are ways to do that.

One of the examples he points to is one I featured in the Flatland column to which I linked you -- The Open Table, a dinner church that has been planted by my own congregation, Second Presbyterian Church.

The key, Graves concludes, is not to teach people how to cook meals and set up church space for them. Rather, he writes, "the key is to teach people. . .to long for the endless immensity of God who is to be found in a community gathered around tables. When we are gathered like that. . .the Christ keeps showing up and breaking bread with us. And at the table our eyes are opened."

It's a lovely vision, and one that is catching on in a time when many churches are struggling to survive.

I was glad to see American Muslim organizations immediately condemning the anti-Muslim tweets put out by President Trump this week. Those tweets were additional evidence that we have a president who sometimes encourages religious and ethnic hatred. I never thought I'd write those words in the 21st Century.