When I was on a reporting trip to Saudi Arabia (and elsewhere) in 2002 with other journalists from the editorial pages of other newspapers, we had a chance to interview Crown Prince Abdullah, who later went on to be king and who now is dead. In the context of a strict monarchy, Abdullah was seen as something of a reformer, meaning at a minimum that he believed in life after birth. 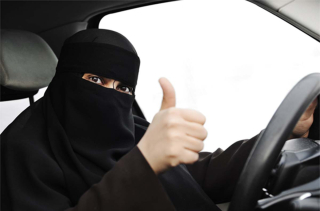 Some of the women in our group asked him when, if ever, the ban on women driving in Saudi Arabia would end. He did a bit of dancing around the issue in his response but he left us with the impression that it could happen eventually.

And now, more than 15 years later, it has happened, under the direction of King Salman. And Saudi women are rejoicing, having won what they consider a great victory, though as this BBC report notes, there still are things Saudi women can't do.

Letting women drive may well qualify as a victory, though many people hope more substantial victories for gender equality in Muslim countries (and elsewhere) are yet to come.

So I think it's important to put this development in some historical context.

The reality is that Islamic scholars have been arguing about women’s rights based on the Qur’an for centuries. And part of the reason is that when the Prophet Muhammad introduced Islam to the world it was enormously liberating for women. The Qur’an, for instance, is the only sacred text to give women rights to inheritance, to own property, to keep their own wages, to create marriage contracts beneficial to themselves, to receive material and physical support from husbands and so forth. (The book of Numbers -- chapter 27 -- in the Hebrew scriptures, however, does tell the story of the five daughters of Zelophehad, who had died in the desert without sons. The daughters asked Moses to approve their inheriting property from their father's brothers, saying it was wrong that "our father's name be taken away from his clan because he didn't have a son." Moses brought the matter before God, who said that the daughters are right. So they got an inheritance.)

What happened eventually, however, was that as Islam expanded into new territories, the heavily patriarchal systems already in place in those cultures finally crushed the requirements of the Qur'an and won the day. It's been only in recent decades that the liberation of Muslim women has begun to happen in earnest in various ways and in various places. And even that trend has been slowed here and there by the counter-trend of keeping women down. (I'm looking at you, Taliban.)

A particularly troublesome Qur'anic verse that critics (and Islamic patriarchal supporters) point to is 4:34. There are various translations of it, but a traditional one, such as the one by M.A.S. Abdel Haleem, starts it out this way: "Husbands should take good care of their wives, with (the bounties) God has given to some more than others and with what they spend out of their own money." Later in the verse, however, husbands are given advice about how to treat wives guilty of "high-handedness." Husbands are to "remind them (of the teachings of God), then ignore them when you go to bed, then hit them."

In other words, that translation of the Qur'an seems to approve of at least some level of domestic violence.

But, as you might imagine, there has been considerable debate about what that verse really means, whether it should be lived out today and whether that's even a good translation. In fact, a female Qur'an translator, Laleh Bakhtiar, in The Sublime Qur'an, insists that a much better translation of the Arabic would yield the offending part of that verse this way: "But those whose resistance you fear, then admonish them and abandon them in their sleeping place then go away from them. . ."

So don't hit them at all, just move away from them. Quite a difference.

I made some of these points in this blog post last year when I reviewed a new book called Women in the Qur'an, which describes many ways in which the Qur'an really can be read as liberating for women.

What many more progressive Muslim scholars now argue is that the oppression of Muslim women, which is widespread and real, is based on culturally laden misinterpretations of the Qur’an.

For Christians, a similar problem has been those New Testament verses that seem to suggest that women always and everywhere are to be living in quiet obedience to their husbands. But that's a blog topic for a different time.

For now, those of us who believe in equal rights for men and women should be glad that Saudi Arabia has taken the step of allowing women to drive. But we also should recognize that it's just one relatively minor development in the story of the worldwide liberation of women. There's so much in that realm left to accomplish, including equal pay for equal work in the U.S.

(I found the photo seen here today at this site.)

LET THERE BE LIGHTS

Tell your inner Hindu that the annual festival of lights called Diwali is just around the corner -- and, as this RNS report makes clear, it may be a corner near you. Sharing religious festivals is one way to increase religious literacy in this country, and God knows we need more of that.

I wrote here this week about the disgusting game of beer pong that some students from St. Teresa's Academy in Kansas City played using cups in the shape of a swastika. I thought you'd be interested in some of what the school leaders are doing to expose STA students to a better way of life than that. You can read about it on STA's Facebook page here. Looks like a good start. Hope offending students pay attention and learn.