As each week passes, it's increasingly clear that Pope Francis is acquiring not just dissenters but possibly actual enemies who oppose his vision of the church, which most careful observers would call more open and flexible than that of either of his two most recent predecessors, Pope Benedict XVI and Pope John Paul II. 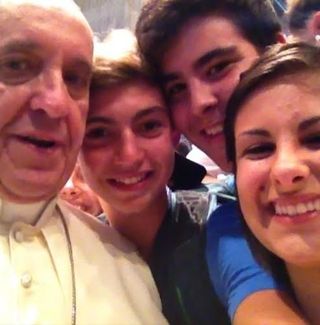 These anti-Francis folks mostly would call themselves conservatives or even proudly pre-Vatican II Catholics. Some of them still consider themselves Catholic, though they've been moved outside the bounds of the official church.

If it's true that people are known by the friends they make, it's equally true that they can be known -- perhaps even more deeply -- by the enemies they make.

And that certainly is true in this case. The people complaining most about Francis are the ones who felt most comfortable with B-16 and JP-II, who tended to be much more like doctrinal police than is Francis.

The most recent evidence of the people opposing Francis came when, as the Associated Press reported here, "Several dozen tradition-minded Roman Catholic theologians, priests and academics have formally accused Pope Francis of spreading heresy with his 2016 opening to divorced and civilly remarried Catholics."

That "opening" was contained in a document called "Amoris Laetitia," or "The Joy of Love." I wrote this Flatland column about that in April of last year.

In theological circles, there is a continuum to describe how clergy approach their work. Among traditional pastors, it runs from being "pastoral" to being "doctrinal." Being pastoral does not mean abandoning doctrine. Rather, it means finding ways to minister to the needs of people without using doctrine as unnecessary punishment.

A New Testament example of being "pastoral" and not "doctrinal" is found in the second chapter of Mark, where we find some religious leaders charging Jesus and his disciples with breaking Jewish law by harvesting grain on the Sabbath. But Jesus says that centuries ago King David did much the same thing. And besides, Jesus says, "The Sabbath was made to meet the needs of the people, and not people to meet the requirements of the Sabbath."

This is how I see Francis approaching his work. It's in large part this pastoral approach that led my pastor, Paul Rock, and me to write our book, Jesus, Pope Francis and a Protestant Walk into a Bar: Lessons for the Christian Church.

Right now not just the Catholic Church but every religion needs leaders who are much more pastoral than they are doctrinal. But those who fit that bill should know that they will make enemies.

Here is a CNN commentary by a female journalist who makes some of the same points I make in this post, but who does it from a different and more personal perspective.

(The photo here today of the pope and some young admirers who took this selfie is one you'll find in our book and is used there by permission of the photographer.)

Human sacrifices (often of children) to appease the gods continue to happen in Uganda, it's reported. Sometimes it seems that the distance humans have come from the days when our ancestors lived in caves can be measured in nano-meters. And some days I'm not sure which direction from the start those nano-meters have gone.