Since last week I've been following the appalling story of students from St. Teresa's Academy in Kansas City caught playing beer pong with cups arranged to look like a swastika (though it was backwards). 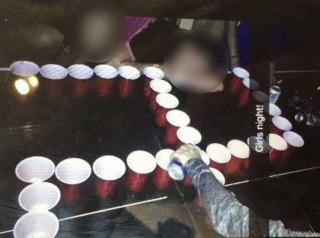 I thought The Kansas City Star's editorial this past Saturday struck the right note in response.

One conclusion to be drawn from this is that lots of school children aren't getting enough history, particularly enough history about religion -- both its highlights and its many dark episodes and eras. St. Teresa's is not alone in this failing. By the time students are in a Catholic high school, as the St. Teresa's students are, they should know at least the basics of the long history of anti-Judaism in Christianity and of Christianity's role in supporting the evils of colonialism. I have an essay about the anti-Judaism subject on my blog here.
In fact, no matter what religion (even if none) students follow, knowledge of the history of religion is essential to be able to begin to understand where we are today and how we got here.
Did these St. Teresa's girls not know that in 1543 Martin Luther published a despicable pamphlet called "On the Jews and Their Lies" and that eventually Adolf Hitler's Nazi regime drew support from Luther's views to justify the goal of the Holocaust, which was to wipe out European Jewry? Did they not know that anti-Judaism has been a baked-in trademark of Christianity until quite recently? It's one of the major shames of the religion, along with such matters as the Crusades and the Doctrine of Discovery.
In fact, the whole St. Teresa's matter raises deeper questions than why there was underage drinking apparently going on and why the school's administration opted for a punishment so light that many alumnae were outraged.
Among those deeper questions: What responsibility do Christian churches and Christian families have to make sure their members understand Christian history, including the many dark eras? (The same question applies to adherents of other religions about their own histories, too.) What responsibility do public or parochial schools have to teach the Holocaust, for example? There are lots of aids available for this task, including from the Midwest Center for Holocaust Education.
In fact, it would be a good idea for every student at St. Teresa's, whether a participant in this disgraceful swastika matter or not, to attend some MCHE programs, including participating in the annual White Rose essay competition.
Religious literacy is severely lacking in America. One result of this willful ignorance is that teen-age girls privileged to be attending a high-quality faith-based school play beer pong with cups shaped like a swastika.

It should make everyone sick, but it should do more than that. It should make all of us aware of how miserably we've failed when it comes to teaching young people what they need to know to be civilized, decent human beings well aware of the history of their own religious tradition.

I was glad yesterday to learn of the letter from the student participants in which they asked for forgiveness. They seemed properly penitent. But all the repentance in the world won't make them less ignorant about religious history. That must be dealt with separately -- and soon.

(When The Kansas City Star published the photo here today it was identified as a "submitted photo.")

Did you know that people the Catholic Church calls "women religious," meaning sisters and nuns, also sometimes struggle with addiction issues? As this National Catholic Reporter story reports, many of them finally are getting the treatment they need for recovery. About time.