Friday here on the blog I wrote a bit about chances for peace in the Middle East, especially focusing on the Palestinian-Israeli conflict. 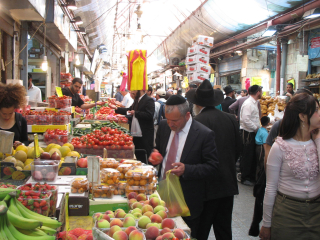 That issue has been unsettled since Israel declared itself an independent state in 1948 and immediately was attacked (unsuccessfully) by surrounding Arab states.

At the geographical center of all this, in some ways, is Jerusalem, whose very name (at least the second part of it) means peace. It is sacred space for all three Abrahamic faiths, Judaism, Christianity and Islam, to list them chronologically. (The book to read, by the way, is Jerusalem: The Biography, by Simon Sebag Montefiori.)

Bernard Avishai, who teaches political economy at Dartmouth and Hebrew University, has just written this piece for The New Yorker about Jerusalem.

It's a sobering look during these Jewish High Holy Days at the various ways the Gordian Knot that is the situation in Jerusalem gets even Gordianer. (Gordianer? Seems like the right made-up word.)

"What no one seems willing to question," he writes, "is whether Jerusalem is 'the holiest place in Judaism,' or, more to the point, whether traditional Judaism entertains the idea of a holy place at all."

Well, you can read Avishai's piece for yourself and argue with it, praise it, dismiss it or share it. One of the problems Jerusalem has is that every idea about its future attracts at least all four of those reactions. Which, I suppose, is another sign of its importance to so many.

(The photo here today is one I took in an old Jerusalem market a few years ago.)

By now, anyone who follows international news even a little has heard of the persecution of Rohingya Muslims in Myanmar (formerly Burma). It turns out this is nothing new for this group of people. This history by Religion News Service will give you that history, which, like so much of history since the 1700s is tied up in the sin of colonialism.

P.S.: An application for the annual Margolis Memorial Scholarship Essay Contest now is available for high school students who will be graduating in the spring of 2018. A $2,000 scholarship will be awarded to the best essay on "The Importance of Interfaith Dialogue Between Christians and Jews." To download a pdf version of the application, click here:  Download Margolis Scholarship

ANOTHER P.S.: My latest Flatland column -- about the next Reformation in Christianity -- now is online here.