Home Archives Profile
Why we should monitor artificial intelligence: 9-21-17
The unknowable future of Jerusalem: 9-23/24-17

In the midst of hurricanes, nuclear threats from North Korea, terrorist attacks in Europe, chaos in Yemen and Syria and the daily shock and awe of the Trump presidency, it's easy to forget that one of the longest-standing international disputes remains unsettled. That, of course, is the Arab-Israeli conflict, of which the Palestinian-Israeli conflict is a subset. 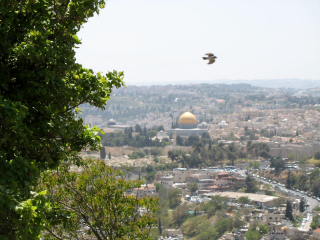 But developments there are not dead in the water. Things are happening. What nobody knows yet is whether any of the news out of that region will means that some kind of long-term settlement is closer.

The development reported earlier this week has to do with some concessions Hamas has made to the rival Fatah movement and to Fatah's leader, President Mahmoud Abbas.

As the Associated Press reports in the story to which I've just linked you, "Hamas, in financial and political distress after years of an Israeli-Egyptian blockade, this week announced it was disbanding a contentious committee that has governed Gaza in recent months. It also said it was ready to hand over all government functions to Abbas and to hold elections in Gaza and the West Bank. The announcement addressed key demands by Abbas, and the Palestinian president cautiously welcomed Hamas’ gesture."

What we do know is that other parties in the Middle East are paying attention and assessing what any of this might mean.

For instance, at the United Nations the other day, Egypt's leader told Israel's leader that Egypt would like to help broker a peace between Israel and the Palestinians.

As the Jerusalem Post reports in the story to which I've just linked you, "Egypt has become increasingly involved in efforts to stabilize the situation in Gaza and bring about a Fatah-Hamas reconciliation, which would lead to a reassertion of the Palestinian Authority in the Gaza Strip."

What remains true is that representatives of the three Abrahamic religions should be following all of this closely and seeking ways to say a word on behalf of peace. So much about this long-simmering mess seems out of the control of any individual, but it's important to let the subject drop as long as people are suffering because of a state of war or near-war.

(The photo here today is one I took in Jerusalem a few years ago. That's the dove of peace looking for a safe place to land.)

A REASON TO REBUILD IN A FLOOD ZONE?

And speaking of matters related to Jewish people, here is a story that complicated my thinking. On the surface, it seems foolish to keep rebuilding homes in flood zones, which is why buy-out programs make sense to me. But as the story to which I've linked you reports, a Jewish community in Houston worries that a successful buy-out program will destroy it. "About 200 of the 320 families at UOS (United Orthodox Synagogues) live within walking distance of the temple,” UOS member Steven Mitzner told Sen. (Ted) Cruz. “For those of us here, we need to live here.” Hmmmm. Hadn't thought about that possibility.