Home Archives Profile
The persistent errors of anti-gay thinking: 9-19-17
Why we should monitor artificial intelligence: 9-21-17

Americans, as I've said more than once, live in a death-denying culture, despite all the fake deaths we see on TV and in the movies. 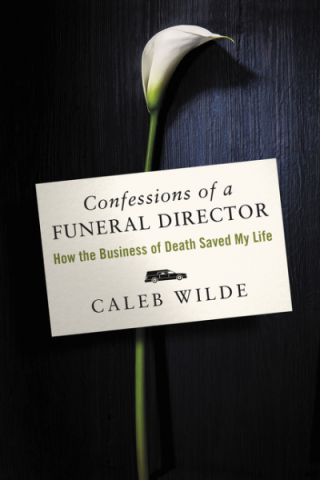 We do whatever we can to stay young, including paying plastic surgeons to make us look younger than we are. We don't talk about death if we don't have to. We have farmed out death to professionals, including funeral directors. Christians, particularly, have moved from real funerals with the body present to disembodied memorial services. (The book to read is Accompany Them With Singing: The Christian Funeral, by Thomas G. Long.)

And we tell grieving people that they should get over it.

Yes, I know what I have just written is overgeneralized, but there's a lot of truth in it.

Today I want to introduce you to a funeral director, Caleb Wilde, who thinks we've gotten all this wrong. You may have met him before when I wrote here a few years back about his blog, "Confessions of a Funeral Director." But now he has a book out by that title, and it's well worth your time.

Wilde shares my view of our culture as death-denying: "We fear death," he writes, "because we don't know it, we don't see it, and we don't touch it. And what we don't know we've painted in broad strokes of darkness and negativity."

Wilde is, somewhat reluctantly, a sixth-generation funeral director from a small town in Pennsylvania. In the book he describes not only some interesting and unusual deaths he's handled but he also shares a lot about himself and how he began life fearful of a God of vengeance who is ready to send millions of people to eternal suffering in hell but wound up in love with a God of love and compassion. It's frankly a journey I wish lots of people would take.

To change his view of God, of course, Wilde did what all of us must do at some point: Confront the old theodicy question, which asks why there is suffering and evil in the world if God is good and all-powerful. Wilde confronted that question when he had to work on a dead baby on his embalming table. He came to understand that by creating human beings with free will, God voluntarily "has chosen to limit God's power. . .Evil and misery were never intended. The world isn't the way God intended it to be. . .By this thinking, if God is limited, then it is up to us, God's people to help the world become a better place by helping people embrace life and turn to this loving God."

God's core, Wilde decided, is "vulnerability, an interdependence that allows God to feel our pains, to know our sorrows and our joys."

In a culture in which doctors have authority over dying and funeral directors have authority over what happens when death occurs, society has "created a culture of death virgins, people who have little experience and know-how when it comes to the end stage of life." Wilde tries to change that by encouraging family members of the deceased to grieve openly, to help him as he removes the body from the place of death and transports it to the funeral home, to dress the embalmed person to prepare for the funeral and to be engaged in the process in other ways.

"The more we practice death care," he writes, "the less we fear death itself."

And the less we fear death, the more we can be willing to grieve and let others grieve in whatever way is most healing and for however long it takes: "We want to take all the mystery out of grief, all the messy dirtiness, and all the uncontrolled tears so that it can be neatly wrapped in a hardcover with a beginning and an end. We want to feel like we have power over death. Closure is this perfect sense of how we suppose we should deal with death." But "closure," he says, not only isn't possible, it's the wrong goal. We have to learn how to live with our dead and continue to honor them by how we live.

This is not the most eloquent, well-edited book you will ever read. People, like me, who tend to be sticklers for proper grammar and who love fresh language occasionally will stumble over a few passages.

But much more important than that is this: This is honest, hard-earned wisdom. And it's wisdom from which all of us can benefit.

As Judaism's High Holy Days begin tonight with Rosh Hashanah, give a read to this lovely piece about the late Elie Wiesel by his son, Elisha Wiesel. Elie Wiesel in many ways became the voice and face of the Holocaust as he took it upon himself to tell not just his own story of survival but the brutal story of this genocide. The world always will need voices like Wiesel's as long as the world continues to hate.