What the long history of Christian dissent means: 8-31-17

As we work our way up to Oct. 31, the 500th anniversary of the start of the Protestant Reformation, what is becoming clearer to me is that astonishing breadth of the protesters and dissenters who were inspired by the spirit of change sweeping Western Christianity at the time. 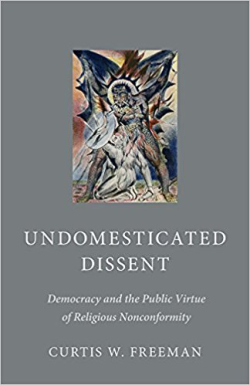 It wasn't just the people who, as adherents of the approach proposed by Martin Luther, eventually came to be known as Lutherans. Oh, no. It was also the Presbyterians, the Quakers, Baptists, Independents, the Familists and Fifth Monarchists, the Levellers and the Diggers, the Ranters and the Muggletonians and on and on.

And the spirit of dissent, though still alive today, sometimes seems overcome by the spirit of descent, as the church in North America and Europe experience decline.

But a new book explores all of this history of dissent and encourages Christians to stand against those cultural forces that cause them to drift into accommodation with the idolatrous spirit of the times, a spirit that is mostly happy being entertained to death in mindless ways as it lives an unexamined life.

The book is Undomesticated Dissent: Democracy and the Public Virtue of Religious Nonconformity, by Curtis W. Freeman, who teaches at Duke Divinity School, and it tells the story of dissenters by making its primary focus John Bunyan, Daniel Defoe and William Blake.

It is a fascinating read, though at times it feels more like a doctoral thesis in which even the many footnotes have footnotes. And, for me, it took too long to get to the application of all this history to today's circumstances. But, in the end, Freeman delivers a clear call to Christians to be in the world but not of it, to be what Freeman's colleague at Duke, Stanley Hauerwas, has called a court jester, meaning a church and its members who can communicate with the ruler but point out clearly what the ruler is doing wrong.

". . .dissent," Freeman writes, "is simply another word for the stance of resisting accommodation to the way things are. Christian dissenters serve the whole church and the wider society as a check against the tyranny of the majority and the domination of the powerful. Christian dissent, however, is not simply a matter of adopting a contrarian outlook toward what most people think. The Christian dissenter is not merely a maverick who resists conventional wisdom but rather a prophet who tells the truth. Yet the powers that be are never comfortable with allowing dissenters free exercise of conscience. They seek to domesticate them, while dissenters look for ways to resist domestication."

Stated more simply: ". . .followers of Christ must learn to live in a perpetual state of tension with the status quo, regardless of what it is. Stripped of privileged standing and majority status, Christians perhaps may again become the salt of the earth."

What finally matters, Freeman says to Christians, is who your God is. If you make status and power and prestige your idol, you've lost your way and you're in no position to protest what needs protesting. When, for instance, the early followers of Jesus declared "Jesus is Lord," it was in many ways a political protest -- at the time against Caesar. That's certainly how Caesar read it. And that's how Christians should mean it today, too, though against whoever is today's Caesar.

Anyone like Freeman trying to tell the story of protesters and dissenters in Christianity faces the problem, he writes, "that dissenters could differ as much from one sect to another, and even among members of the same sect, as from the established church."

The book is full of the histories of various dissenters from the 16th century on, and the variety and zeal is almost overwhelming. It was a wildly different time, when people on street corners would argue about the meaning of the Eucharist and not about whether the referees were fair in the Mayweather-McGregor boxing match.

But, as I say, all this history finally moves toward the question of how Christians are to be prophetic voices of conscience today. And history that doesn't teach us something about our own time is merely words on the page. This book is much more than that.

The recent so-called "Nashville Statement" by Christian evangelicals against LGBTQ people is receiving lots of backlash, as it should. Even Nashville's mayor hates it. At a time when Christians should be using their prophetic voices against racism, including white supremacy, this statement returns to an old, misguided fight that anti-LGBTQ forces have already lost. The Nashville Statement is in many ways a dying cry from people on the wrong side of history and the wrong side of the Bible. As President Trump might say (though probably not about this), sad.