I have never boxed and have never been a fan of boxing. The closest I've come to seeing boxing, except in flipping by it on TV now and then, was in the late 1960s when I covered a visit to a high school in Rochester, N.Y., by Muhammad Ali. 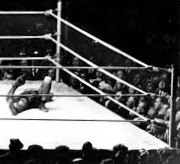 True story: A kid on stage surprised Ali, caught him off balance with a punch and knocked him down.

What I've never understood about boxing -- amateur or professional -- is why this brutal sport is allowed to be legal and why people of faith who are tasked with protecting human life don't work harder to ban boxing as an inhumane, illegal activity.

Saturday's Floyd Mayweather Jr.-Conor McGregor fight brought all this back in view for me. (The fact that this fight went 10 rounds, was widely considered an entertaining match and nobody died doesn't change my mind about all of this.)

The idea of banning boxing because it's potentially lethal or brain damaging is not new. As far back as 1985, the American Public Health Association issued this statement calling for the "sport" (a misnomer if there ever was one) to be banned. The year before that, the American Medical Association called for abolishing boxing.

In 2005, the San Francisco Chronicle published this column that notes this: "Among inherently treacherous sports, boxing is unique -- the only one in which a contestant achieves the pinnacle of success by pummeling an opponent into a state of unconsciousness. It encourages actions that would warrant assault charges if they occurred on the street."

Hundreds and hundreds, perhaps thousands, of boxers have died because of injuries sustained in the ring. In fact, The New Yorker reported in 2015 that there have been 2,036 "fights in which a boxer was killed. It starts with the friends Job Dixon and Richard Teeling, who fought on May 14, 1725."

The world's great religions teach that every person is of inestimable value. In light of that, why is it legal to have a sport in which the primary aim is to beat someone senseless, even if the ultimate result is death?

(Yes, I know. Money is the answer. Money is often the idolatrous answer.)

Boxing should shame humanity, especially given the fact that there are many other sports in which there can be an awesome spirit of competition and a high level of skill but that are not potentially fatal. (If we ban boxing, should we also ban American football and mixed martial arts? Discuss.)

U.S. Secretary of State Rex Tillerson is cutting and reorganizing various functions in his department, though this report says he's expanding the roles of special envoys for religious freedom, HIV/AIDS and Holocaust matters. It's too soon to tell whether this is a necessary rearrangement or whether it's mostly a political gesture. If you care about some areas being cut or expanded, you'll want to pay close attention.