Home Archives Profile
What Nazi attachment to occultism means for us: 8-28-17
The murderous business of boxing: 8-30-17

Sometimes you just have to laugh at people of faith. (That sometimes means laughing at myself.) Laughing is just what I did when I ran across the name of a 17th Century Englishman: Praise-God Barebone. 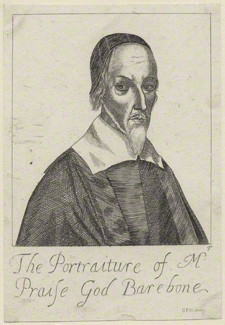 What's better is this: The Wikipedia piece to which I just linked you reports that he was "said to have been christened 'Unless-Jesus-Christ-Had-Died-For-Thee-Thou-Hadst-Been-Damned Barebone.'"

I discovered his remarkable name while reading a new book, Undomesticated Dissent: Democracy and the Public Virtue of Religious Nonconformity, by Curtis W. Freeman. I plan to write more about the book later here on the blog.

Praise-God, it's reported, had at least one son, to whom his parents gave a much more common name, Nicholas Barbon. The spelling of the last name varied, as did a lot of spelling in the Elizabethan period. In fact, the English folks back then were a lot like tweeters and e-mailers today, many of whom seem proud of their inability to tell "its" from "it's" and "you're" from "your" and who write about Fredrick Douglas when they mean Frederick Douglass.

And Praise-God is not forgotten even today. Did you know there's a blog called Praise-God Barebones? (The writer pluralized the last name.) Check it out.

But as for faith-based names: In our time we have softened the practice a bit, meaning we don't name our kids "Praise-God," but, rather, such names for females as Grace, Faith and Hope. Males, by contrast, get names less attached to religion but more indicative of living according to certain moral codes -- names like Earnest. Still, both sexes among Christians and Jews often get biblical names: David (my own middle name), Mary (the name of my youngest sister), Samuel, Joshua (the first name of one of my grandsons) and Moses. Not to mention Jesus, a popular name in Latino cultures.

But I'm thinking the world might actually be improved if we returned to such names as Praise-God. For instance, would our president be as flighty if, instead of Donald, his name were Ten-Commandments Trump?

Or might not Pat Robertson make much more sense if he had gone through life as Saved-by-Grace Robertson? Maybe. Maybe not. Naah, probably not.

In any case, I'm going to keep Praise-God Barebone in mind in case any of our kids announces that another grandchild is on the way. If it's a boy, I'm going to suggest Praise-Grandpa as a lovely first name.

One thing you can be certain of about racist vandals, and that is their soaring ignorance. In England, for instance, vandals assumed that the family moving into a home was Muslim. Not true. The family is Hindu. So the criminals scrawled misspelled Islamic words on the home. Anonymity allows lies to be told. Just the other day, for instance, after the local blog Tony's Kansas City picked up and reposted one of my blog posts, an anonymous reader left a comment saying I live in an all-white neighborhood in Kansas. Wrong on both counts. Anonymity is the shield of cowards and liars.

P.S.: The next visiting scholar at Village Presbyterian Church in Prairie Village will be Serene Jones, president of Union Theological Seminary in New York. She's coming in March. Her topic: "American Theology." Details are here.