In recent weeks, the idea of nuclear war has been floating around our political atmosphere like a dreaded ghost from the past, a specter so distressing and destructive that it's in a category all its own. 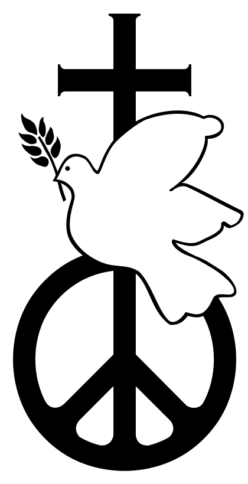 The threatening shouts between and about North Korean President Kim Jong Un and President Donald Trump have forced us to reimagine what we should think about nuclear weapons, especially if we identify as people of faith whose task is to promote peace and harmony in the world.

But the conclusion in the article may not be as clear and final as many might wish: ". . .right from the beginning of the nuclear age, Christians have found themselves on both sides, often in rather dramatic ways. . .The one thing organized Christianity doesn’t seem to offer is a clear, unanimous answer to the dilemmas of a nuclear age."

Which is to say that Christians have found themselves on various sides of the many issues that nuclear weaponry inevitably raises. Here, from the Economist piece, is a shocking example:

"When the nuclear era dawned, Christians were 'on both sides' in a more literal sense. The American aircraft which obliterated Hiroshima and Nagasaki were crewed by Christian servicemen and counseled and blessed by Christian military chaplains. And Nagasaki, as it happened, was the main bastion of Japanese Christianity, a tradition which had survived harsh persecution between 1600 and 1850. Its Urakami cathedral was an early mega-church with 12,000 members, and it provided the bombers with a landmark that could be identified at 31,000  feet. It has been estimated that 8,500 of those faithful died as a direct or indirect result of the bomb. Worshipers attending Thursday morning confessions were annihilated instantly by the fireball which exploded 500 meters above the house of prayer."

I am among those Christians divided about the use (and non-use) of nuclear weapons. I thought President Harry S. Truman made the right choice in dropping the bomb on Hiroshima because I believe that it ultimately saved many lives by bringing the war in the Pacific to a conclusion. I thought the second bomb on Nagasaki could have and should have been delayed and, ultimately, not dropped at all. But that's hindsight from someone who was only about eight months old at the time.

It is true that nuclear deterrence -- the eerily named policy of "mutually assured destruction" -- has kept nuclear war away since then precisely because both the U.S. and the Soviet Union (later Russia) have recognized that any use of nuclear bombs would mean the end of our civilizations as we know them. So having the bombs has, ironically, served a peaceful purpose.

But despite humanity's long history of being a warring animal, I'm not yet convinced that there's no other way to achieve peace than merely threatening to destroy one another in the most horrible way imaginable. I think we're capable of better than that, though for sure some days I wonder.

What Christianity and all religion should be about, of course, is peace and helping everyone live full and grateful lives. Somehow nuclear weapons seem anathema to all that. And I hope we can find a reliable way to de-nuke the world. The sooner the better. But to denuclearize unilaterally while evil rulers like Kim Jong Un still are in power is simply a way of committing national suicide.

A PAPAL APPROACH TO REFUGEES

Pope Francis, it's reported, is becoming the voice that speaks on behalf of the world's many refugees. For instance, this week a Vatican group he oversees issued this document about how those refugees should be treated. Give it a read. Then think of some politician who could benefit by reading it and send it along.