Recently here on the blog, I wrote about the various ways that Americans have bought into fake news, conspiracy theories and magical thinking. 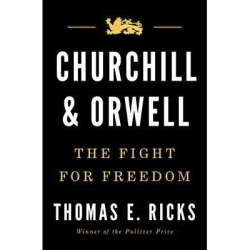 Truth becomes a casualty when that happens. Facts become what an aide to Donald Trump has called "alternative facts." In the end, we cannot diagnose our condition because we can't accurately describe our reality. It's one reason that world religions teach the importance of seeking and sharing truth, even while recognizing that sometimes truth is best communicated by metaphor, myth and allegory.

I've just finished reading a book by Thomas E. Ricks, Churchill & Orwell: The Fight for Freedom, in which he praises both Winston Churchill and George Orwell for their uncanny ability to find and face facts and for how that led them to be important leaders -- one in statesmanship, one in literature -- who were able to guide people toward truth and liberty.

Ricks urges all of us to use Churchill and Orwell as models in being relentless about finding what is true and what is not.

"Facts," he writes, "are impressively dual in their effects. 'Truth and reconciliation' meetings in Argentina, South Africa and in parts of Spain's Basque country have demonstrated that facts are marvelously effective tools -- they can rip down falsehoods but can also lay the foundations for going forward.

"For democracies to thrive, the majority must respect the rights of minorities to dissent, loudly. The power often will want to divert people from the hard facts of a given matter, whether in Russia, Syria or indeed at home. Why did it take so long for white Americans to realize that our police often treat black Americans as an enemy to be intimidated, even today? Why do we allow political leaders who have none of Churchill's fealty to traditional institutions to call themselves 'conservatives'?

"The struggle to see things as they are is perhaps the fundamental driver of Western civilization. . .It is the agreement that objective reality exists, that people of goodwill can perceive it and that other people will change their views when presented with the facts of the matter."

So it's no wonder that Orwell's dystopian novel, 1984, shot to the top of Amazon's best-selling book list when Donald Trump was elected president (and as of Wednesday was still No. 14). In the book, Orwell argues on behalf of the kind of truth that Trump and his ilk dismissed by pushing the erroneous idea that Barack Obama wasn't born in the U.S. and that climate change is a hoax invented by the Chinese.

We cannot live without access to reliable information. When we try to, the values that religion teaches are among the first casualties.

CAN HE STILL DO MINISTRY?

Speaking of the truth setting people free, sometimes that can mean strange things. For instance, it's reported that a Catholic priest in Alexandria, Va., is now free from public ministry duties after he acknowledged the truth that as an "impressionable" young man he had participated in Ku Klux Klan cross burnings and other hateful activity. By all accounts he has repented of all that long ago and has been a faithful and effective pastor. So perhaps the church can find a way to use his compelling story of redemption.