HARRISON, Ark. -- Drivers traveling through here on northbound U.S. 65 close to the Missouri border can find evidence that the fragility of human reasoning undergirding white supremacy is not just alive and well but willing to take its place alongside billboards for car dealerships and restaurants. 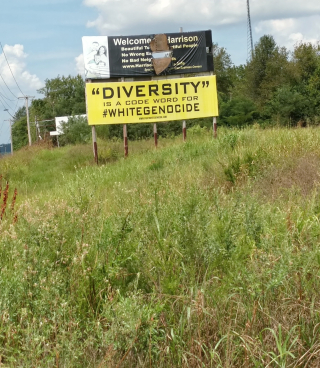 The billboard you see here -- well, the bottom part of it, anyway (the top used to be a "Welcome to Harrison" sign) -- includes this website about fighting "white genocide." I don't recommend you spend much time there if you have anything like a weak stomach. If the site doesn't make you sick, you already may be sick.

One particularly sickening thing on the site is a photo of a man with white nationalist signs demonstrating in Harrison while behind him is a woman holding a Christian flag.

It's a reminder of how often religion in general and Christianity in particular has been drafted into armies supporting causes that are in violent tension with the foundational principles of the faith. (But this shouldn't come as a surprise to people familiar with Harrison. Its ties to white nationalism and the Ku Klux Klan are deep.)

And yet in white nationalist rhetoric from Charlottesville to Harrison, from Washington, D.C., to Kansas City it's possible to hear white supremacy justified on the basis of religion.

Not only does that make no sense at all, but white supremacy on its own, without religion underneath it, is based on a ridiculous misreading of history. Did not white people support the evils of slavery? Didn't they fight a Civil War to retain the right to own people as property? Didn't they bloody up Europe in World War I and World War II in support of fascism and Nazism and other isms, including communism, that have proven to be monstrous mistakes? And didn't the white people of Germany mostly stand by while their admired leader developed a plan to murder all the Jews of Europe -- a plan that almost succeeded?

I'm a white guy -- from Swedish and German stock. And in many ways that has made life easier for me. But to imagine that being white is somehow a superior condition or to pretend that the growing pluralism of the U.S. amounts to white genocide is lying of the worst sort.

What we do know -- from results of the Human Genome Project, for instance -- is that race is much more a political than a biological construct. Race is a simplistic category that's mostly a surrogate for skin color and it's often used to oppress people. In the end, there really is only one race -- the human race. And folks who put up ignorant, belligerent billboards so travelers on American highways can read them are standing in opposition to healthy religion, good science, plain common sense and basic decency. To do or say anything that might encourage people who believe diversity is a code word for white genocide is to join their ignorant armies.

(As the story to which I've linked you above on the words "are deep" notes, there are folks in Harrison fighting back. In fact, just up the road from the billboard pictured here is one that says, "Diversity: A Code Word for Salvation." That billboard may claim far too much but at least it's an effort to stand against the big lie of white supremacy. In any case, I'm really proud to live in a country that permits the kind of freedom of speech that allows even idolatrous prejudice to be spewed from billboards.)

WHEN PREACHING TO RACISTS. . .

This Baptist News story reports that some pastors find it difficult to preach against racism and white supremacy and still keep their jobs. Why would you want to keep your job if your congregation is full of racists and white supremacists? Either convert them to decency, preach the membership down to zero and start over or go somewhere with people open to hearing the truth.