The first solar eclipse yesterday where we live in Kansas City was loud and wet (as this photo of our driveway shows). A storm cell moved through soon after 9 yesterday morning, blotting out the sun. And the moon wasn't at all responsible. 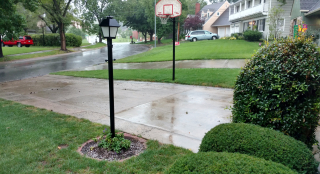 I went to the Post Office in the downpour to pick up mail held for us while we spent several days in Arkansas celebrating Marcia's birthday and some long friendships. A woman ahead of me in line noted my sandals and opined that I was wearing the wrong kind of shoes for this weather.

"I know," I said. "But the good news is that we get two solar eclipses today."

By 11:40 a.m., the sky over our neighborhood had mostly cleared, and I watched as a fingernail of the moon began to eat up the sun, imagining what people hundreds and thousands of years ago might have made of what surely to them was a frightening phenomenon. 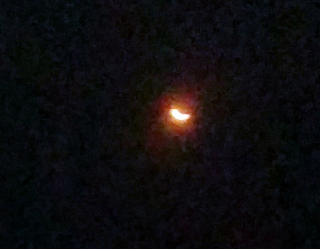 As 1 p.m. approached, the outside world grew dimmer and dimmer. And then about 1:10, it was dark enough for the automatic outside porch lights on our house to turn on. Our neighborhood was a few miles south of the area of totality, so we didn't get a complete obliteration of the sun. But it was close -- and impressive, nonetheless.

The amateurish photo of the sun and moon you see here I snapped by putting my eclipse glasses over my camera lens. Still, it captures a bit of the mystery and mystique that folks like us all across the U.S. experienced yesterday.

Lots of people attach some kind of spiritual significance to events like a total eclipse. Why? Aren't we simply seeing the reality that science predicts?

Well, yes, but if we can't get beyond mere materialist science to appreciate a broader picture marinated in meaning, we'll miss a lot. Author Annie Dillard saw a total eclipse back in 1979 and wrote this lovely piece about it, which The Atlantic just republished online. It included these wise words:

"This was the universe about which we have read so much and never before felt: the universe as a clockwork of loose spheres flung at stupefying, unauthorized speeds. How could anything moving so fast not crash, not veer from its orbit amok like a car out of control on a turn?"

And yet, at least so far, the cosmos -- though expanding at an accelerating rate and carrying with it all those loose spheres -- holds together. Laws of nature are dependable enough that we can build homes, plant crops, fly airplanes and cross bridges knowing that there is in the very structure of reality some kind of dependable foundation, some ground of being, as theologian Paul Tillich called it, that lets us live without fearing that the rules will change in 10 minutes and water will fall upward or the moon will smash into Earth and kill us all. What people of faith would add here about the dependable way the world works is something like the phrase, "as God intended."

We humans are fragile and it's true that we often are at the mercy of forces we can't control -- from solar eclipses to noisy thunderstorms (to ourselves, at times) -- but what people of faith trust is that God loves them and, in the end, they will be eternally safe. And that should be enough even in the darkest morning or noonday.

The largest annual Christian festival in Great Britain has decided to expand its boundaries to include Muslims, it's reported. Good. This does nothing to disrespect Christianity. Rather, it's a demonstration of the kind of hospitality that Christians always should demonstrate.