How money sometimes gets used in church battles: 5-29-17

Different faith traditions use different methods to provide financial support for their houses of worship and related programming, staff and outreach work. 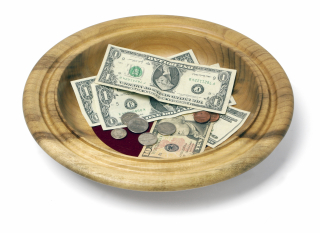 It's typical, for instance, for synagogues to have membership dues, sometimes on a sliding scale for individuals and families.

In churches, by contrast, it's common for members (and sometimes non-members who attend regularly) to make annual financial pledges to support the congregation's staff, building, operations and outreach ministries. Typically those pledges are paid off with contributions put in the collection plates each week at worship.

At least in theory, those pledges are seen as an expression of gratitude to God for divine blessings and are not dependent on who, at the moment, might be filling the role of senior pastor, rector or priest.

With that as background, let me describe something happening in a church I know about.

The current pastor, who has been on the job there several years, recently announced -- to the surprise and consternation of some and to the relief of some others -- that he plans to leave soon.

One member of this congregation quickly circulated an e-mail among some other members announcing that she did not trust the elected leadership of the congregation, demanding an explanation of what was going on and announcing a pledge reduction of 90 percent a week while she evaluates her options.

Before long, a "reply all" note from another member announced that he and his wife would be withholding the remaining part of their pledge to the congregation until the situation gets resolved.

I have no direct stake in this matter. I happen to know the pastor and, when I learned he was leaving, sent him a quick note to wish him well as he discerns his future. He replied with thanks and then said, "Whoever said faith is not an adventure?!"

But it saddens me that the people withholding their pledged financial support for the church seem to view things there the way the member of a country club might look at some internal issue that angered them. (In fact, some are talking about leaving the congregation altogether.)

But a pastor is not equivalent to the paid manager of a country club. In Christianity the pastor is considered to be called by God through the voice of the congregation and the denomination's polity structure to fill the role of spiritual leader to equip members to do ministry. Money pledged to support that work -- once pledged -- should never be dependent on unanticipated events that upset the person who made the financial pledge. That money, in effect, belongs to the mission God has given to that congregation. (And if I die in the middle of the year, I hope my descendants, if possible, will fulfill the rest of my annual pledge to my congregation.)

Even if something happens that makes a person decide to abandon the congregation altogether, a pledge should be honored as a promise to God. Money in such cases should not be viewed as a weapon, which is how it appears that it is being used in this case.

Now, of course, what I just described is the way things should work. The reality is that they sometimes don't work that way at all because human egos and agendas and misunderstandings get in the way. Which is why Christianity is about grace, forgiveness, reconciliation.

Which is one more reason it's such a difficult faith to live out fully and consistently.

On this Memorial Day, I hope you'll join me in giving thanks to all the people in American history who gave their time and sometimes their lives so that we could vote, choose our religion freely, receive public education and all the other amazing benefits and responsibilities of being a citizen of the United States. Freedom, of course, is never free.

P.S.: My latest Flatland column -- about what the Jewish community in KC has done to recover from the 2014 shootings -- now is online here.