Home Archives Profile
Modern echoes of the Inquisition: 5-26-17
How money sometimes gets used in church battles: 5-29-17

In the midst of chaos, of crisis, of challenge, death and disaster, it's the human stories we look for to give us hope, perspective and a reason not to despair about humanity. 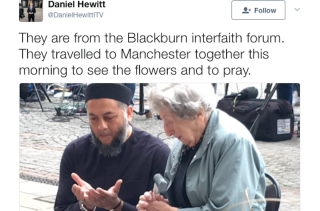 So we are drawn to stories about rescue in the 9/11 terrorist attacks. We seek out stories of fire fighters and police officers and paramedics putting themselves in harm's way almost daily.

And we look for examples of people who cross boundaries to bring comfort, to offer a word of balm, to show evidence of our common humanity.

Here is just such an example in the aftermath of the deadly suicide bombing outside a concert hall a few days ago in Manchester in the United Kingdom.

What we see in this brief story from the JTA (Jewish Telegraphic Agency) news organization is a 93-year-old Jewish woman speaking and praying with a much younger Muslim man at a makeshift memorial site in Manchester.

Be sure to scroll down and watch the brief, touching video of the two.

We don't know a lot about either person except that both are from an interfaith forum in another English city. But in this case their individual identities are much less important than their roles as representatives of what humanity should be and how humans should behave in response to a catastrophe.

There are, of course, other iconic models of that. Think, for instance, of the lone man in Beijing in 1989 standing in front of a tank near Tiananman Square, where people died in a protest movement.

We need those images. We need people to show us how to be fully human. What they say to the suicide bombers, to oppressive government authorities is that you have chosen the wrong side of both history and humanity. Yes, each of us is capable of evil, but at our best we choose good, even love.

(The JTA story identified the photo here today as a screenshot from Twitter.)

WHEN ANTISEMITISM IS RESURGENT

A wave of antisemitic attacks in the Bay Area of California has heightened tensions there, but it's not the only place in the U.S. where this evil is happening. When my next Flatland column posts Sunday morning here, you can read about how Kansas City's Jewish community has been recovering from being targeted in shootings in April 2014 at Jewish institutions here. Antisemitism is a sickness rooted in fear and marinated in hatred. Its sources must be uprooted and its victims surrounded by love and protection.

P.S.: The next speaker in the Contemporary Spirituality series (I spoke in January) will be Ilia Delio, a Franciscan sister who teaches at Villanova. It's a Friday evening/Saturday day event June 23 and 24, but there are options if you can be there only part of the time. For a pdf about the event, download this file:  Download Delio

ANOTHER P.S.: My latest Flatland column -- about what the Jewish community in KC has done to recover from the 2014 shootings -- now is online here.