In a time of division and rancor within Christianity (well, within almost all faith traditions), it's sort of nice to hear about the potential for cooperation and partnership. 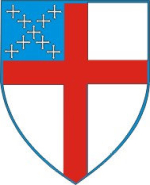 A group made up of Episcopalians and United Methodists is recommending that both denominations enter into what is called "full communion." Each would remain a separate body, but such an agreement would allow them to work together in many ways, both theologically and in terms of how ministry is done. (You may know that Methodism originally was a break-away movement from Anglicanism.)

As the Episcopal press release to which I've linked you above reports, "Full implementation of the proposal will take at least three years. The Episcopal Church General Convention and the United Methodist Church General Conference must approve the agreement, which culminates 15 years of exploration and more than 50 years of formal dialogue between the two churches."

The 10-page document proposing full communion is called “A Gift to the World, Co-Laborers for the Healing of Brokenness."

One of the aspects I particularly wondered about is how the document proposes to treat the issue of apostolic succession, the idea that bishops in the Episcopal Church, like Catholic bishops, believe they can trace the chain of their ordination all the way back to the apostles of Jesus Christ. Protestants, including United Methodists, generally aren't nearly as concerned about that if they're concerned at all.

The Episcopal-Methodist document deals with that starting in line 143. It seems to draw a distinction between apostolic succession and  “historic episcopate,” which apparently satisfies both sides, though it might take a weekend seminar to explain it to the rest of us. You can read it in detail in the document to which I've linked you if that interests you.

In any case, what Christians call the Body of Christ -- the church universal -- is badly divided. Any move toward unity -- not uniformity, which is something different -- is to be applauded, as far as I'm concerned.

But it may be that the Episcopalians are in process of entering into full communion with a body that is itself on the edge of schism. I wrote about that, including the role that the Rev. Adam Hamilton of the Kansas City area is playing, in this recent Flatland column.

How interesting. In his Sunday speech in Saudi Arabia at the beginning of his world religion tour, President Trump's speech as written did not use the controversial term "radical Islamic terrorism," referring to such violence instead as "fanatical violence," though at one point he referenced "Islamic extremism." But as this Washington Post story notes,  "he slightly veered off the prepared excerpts released earlier by the White House, saying 'Islamic' instead of 'Islamist' on several occasions." On the whole, the wording choice in the prepared remarks was an improvement. I plan to have a deeper look at this speech and its ramifications here on Wednesday.