When Jesus of Nazareth began his brief (one to three years) ministry, he did not, while on Earth, start a new religion. What he started was a movement to reform certain practices and focuses of Judaism, his religion. 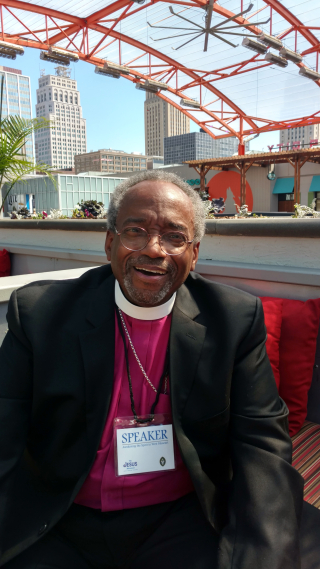 Which is why religion scholars -- the best ones, any way -- don't refer to Jesus' 12 apostles as Christians. And they say it's anachronistic to speak of Christianity as a separate religion from Judaism until decades after Jesus' time. The term they most often use to refer to people attracted to the life and message of Jesus in the early years is the Jesus Movement.

Michael B. Curry (pictured here), presiding bishop of the Episcopal Church, thinks it's time for a renewed Jesus Movement, one that draws its focus and energy from the teachings of Jesus and that de-emphasizes the institutional nature of the church.

Curry was in Kansas City (and Springfield, Mo.) this past weekend for event called "Awakening the Spirit." I had a chance to talk with him at the Power & Light District in downtown KC before he addressed the crowd there.

"I really believe," he told me, "that whether it's the church or any organization or institution, the further it gets away from its reason for being, the weaker it becomes. And the closer it gets to its reason for being, the stronger it will be. That's one of the reasons I've been using the language of the church being a Jesus movement. That's where the origins are. Jesus began a movement and that movement gathered around him and changed lives."

For the institutional church, he said, it means "reclaiming who you are. The closer we are to our deepest roots as followers of Jesus of Nazareth I think the more effective we will be in engaging the culture and being a witness in our time."

I asked him how a church can appeal to people rooted in our 21st Century scientific culture and worldview who struggle to make sense of stories from the gospels about the virgin birth, resurrection, a man who can walk on water and calm stormy seas with a word.

Curry said the thing to do is to focus not on those things but on the loving spirit of Jesus and how we might acquire that same kind of spirit: "Then the kind of life that Jesus lived becomes a possibility for me now." Rather than getting stuck in arguments about whether Jesus really drove demons out of people or raised Lazarus from the dead, he said, people should try to live in ways that mirror the spirit of Jesus. "That's a game changer," he said.

Curry said he's "finding a receptivity" to his idea of describing his denomination as "the Episcopal branch of the Jesus movement. It's reclaiming who we are in the first place. It's not actually anything new. It's going down to our deep roots. . .This is a cause, a cause that actually changed lives and changed the world for good."

The Episcopal Church, like such Mainline Protestant churches as the Methodists, Lutherans and Presbyterians, has seen its membership numbers decline in recent years for a number of reasons, including people who left the church when it began ordaining otherwise-qualified gays and lesbians. That's what is bringing the United Methodist Church to the edge of schism today, as I wrote about recently here. But the core issue is not about sexuality but about how to interpret the Bible.

So Curry is right to try to return to the center of the Christian faith, Jesus Christ himself. Whether the Episcopal Church as an institution can deliver that message in an effective way -- or whether some new forms of messenger are needed -- isn't yet clear. Often across history the institutional church universal (not just the Episcopalians) has been as much a hindrance to the message as a help.

Maybe the Jesus movement Curry is promoting can help to change that.

NOT EXACTLY A JEWISH ALTAR CALL, BUT. . .

Some American Jews, The Forward reports here, are moving toward proselytizing, or evangelism, to bring more people into Judaism, even though that approach is unusual among Jews. I once heard a rabbi explain that all Jews should do is to tell the story of their people. If those listening believe they find themselves in that story they are welcome to join. That's a fairly passive approach. The approach described in the story to which I've linked you is more assertive.

Motherprayer: Lessons in Loving, by Barbara Mahany. The author, a former Chicago Tribune columnist who continues to write for that paper and others on a freelance basis, is an excellent writer and -- more to the point -- observant and thoughtful mother. You may have to hustle to give this book to someone for Mother's Day this weekend, but it would be worth it. Mahany has taken careful notes about her experience of motherhood and has woven them together into this lovely tapestry that comes with Catholic and Jewish sensibilities. Motherhood, she writes, is an act of courage, "from the moment that seed of life burrows deep into the womb, makes its way to connect to the richness that is a mother's blood, lifeblood, that will feed, will sustain. From conception on, there is no going back, if God is willing, if prayers are answered. We move forth, one corpuscle tied to the next. We are in this, literally, together. Forever entwined." And what is prayer for mothers? "We fill in the blanks with supplications that wash out from deep inside us, and over us, and far into the beyond. We pray for hours if we have to, keeping on with all the rest we do. Not letting on that there is prayer at work. We drop to knees. We dab holy water, head and chest and shoulders, the sign of the cross. We lie down and stretch our arms as high as we can reach. We venerate. We call on God, and ones we love who are no longer but might well come to the holy blessed rescue." And then she shares all that with others.