What are non-religious reasons for being good? 4-26-17

As Christian churches in the U.S. try to find ways to be faithful to their theology and still seem relevant and useful to millennials and other younger people, they face a reality that the Rev. Jan Edmiston (pictured here in the sanctuary of Second Presbyterian Church), co-moderator of the General Assembly (national governing body) of the Presbyterian Church (USA), described this past Saturday morning when she spoke to a gathering at my congregation. 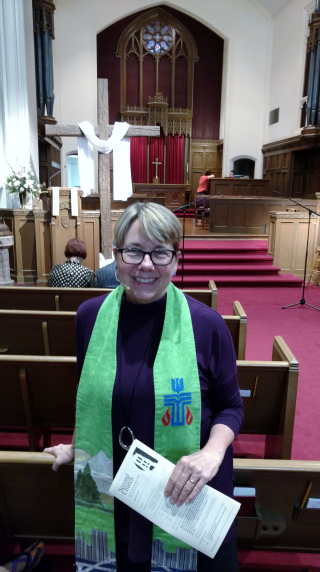 "You can be considered a good person," she said, "and never set foot in a church building." More and more Americans, she said, believe that they don't need church to help them be what she called "proper human beings in the 21st Century."

It may have been coincidental, but exactly that subject came up two days earlier in a downtown Bible study that I help to lead. In effect, this was the question that arose tangentially from our reading of the New Testament book of Galatians: Can you be good without God? And, if so, what would motivate you to be?

One of the women in our group noted that she has met some non-religious people whose behavior and general demeanor is more "Christian" than that of some Christians she knows. That is, she said, these religiously unaffiliated people are thoughtful, merciful, generous, compassionate and loving people, whereas some Christians are judgmental, narrow and sometimes even hateful.

The question I raised in the downtown group that I didn't have a chance to raise with Edmiston or with those who came to hear her was this: Although I know what I consider to be my own motivation for trying to be "a good person" who seeks (and often fails) to be kind and generous (my motivation has to do with expressing gratitude to God for all the ways God has been generous to me), what ultimate motivation do non-religious people have to behave in ways that are loving, considerate and worthy of praise?

So far, the best answer I can come up with is that the world simply works better if people behave decently. That is an answer rooted in expediency and even self-interest, I realize, but it seems to me to be true. The world is safer, more dependable and a more desirable place to live when people are generous, kind and the whole list of attributes that children learn in scouting organizations. In the same way, the world is all those things because we have stop signs and laws that regulate where you can build a house or a 35-story hotel.

No one wants to live in chaos or anarchy. Which is reason enough to behave in a civilized way.

So Edmiston is right that lots of people in our culture can be considered a good person without any religious motivation for being so. But this reality makes it more difficult for faith communities of any variety to make an argument for membership. And yet expedient or self-interested reasons for good behavior don't get anywhere near the eternal mysteries that religion seeks to unpack. Where do you go to get help discovering meaning and purpose? Where do you go to find answers to questions about how we got here and why we're here at all?

Help with those questions is what faith communities can and should provide. It's not all that such religious groups should do, but if they're not doing at least that it's hard to know why anyone would want to be part of them.

In coincidental harmony with my main topic here today, the 2017 Templeton Prize has just been given to Alvin Platinga, retired now from the University of Notre Dame. He spent much of his academic career arguing that theism, or a belief in God, should be considered a serious philosophy by scholars. “Alvin Plantinga recognized that not only did religious belief not conflict with serious philosophical work, but that it could make crucial contributions to addressing perennial problems in philosophy,” said Heather Templeton Dill, president of the John Templeton Foundation. This is an important annual prize. You can read about past winners here.