Home Archives Profile
Our image of God really matters: 4-24-17
What are non-religious reasons for being good? 4-26-17

I have been with quite a few people as they've neared death, but I've never heard anyone's last words. Both my parents died 500-some miles away from me, though I saw both of them within months or weeks of their end. And I especially remember my father mumbling a few things that made almost no sense to me, as senile dementia had bewildered his mind near the end. 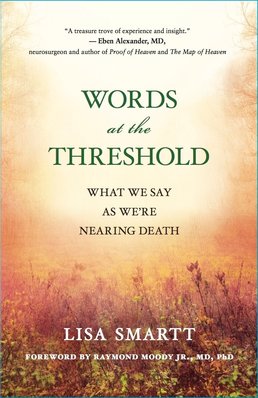 But it turns out that such seemingly nonsensical mumbling may have deep, even eternal meaning, writes Lisa Smartt in her new book Words at the Threshold: What We Say as We're Nearing Death. And not just the baffling words but also the body movements, the facial expressions and the words that do seem to be coherent in some way.

Smartt draws on the death not just of her own father, but also on hundreds of reports and transcripts of final words that she collected in something called the Final Words Project.

As her father neared the end, he spoke of getting prepared for a big exhibition, a big art show of some kind: "But at the time," Smartt writes, "none of us knew that this kind of figurative language is common in the words of the dying. We dismissed my father's utterances as mere 'word salad' or the result of medications he had been taking."

But, she discovers, she was wrong. Through her work, recorded in this book, she learns a lot about the words, visions and actions of people at the edge of death. And although I would not say this book is overtly religious in the sense that it reflects the theology of this or that faith tradition, Smartt does conclude this: "The words at the threshold suggest to me that consciousness does indeed survive, and that we ourselves can be both guides and tourists as we journey with those we love to the portal."

Sometimes death comes so suddenly that there can be nothing that qualifies as final words, but when they do happen, she writes, "Our final words deeply reflect who we are and what most matters to us. It is as if the lens of our Creator is magnified and all that we are is in close view."

Smartt also draws from research done about so-called near-death experiences and reports that the "paradoxical language associated with near-death experiences suggests that there is a dimension or reality that cannot be fully explained in the language with which most of us are comfortable. . .The language of the threshold may be governed by its own logic that is only barely comprehensible to most of us."

Even when we can understand something of what's being said, we often are left with questions. For instance, when Apple founder Steve Jobs died, his last recorded words were "Oh, wow! Oh, wow! Oh, wow!" And wouldn't we all like to know what wowed him?

The final words we may hear, she writes, can be "sophisticated metaphors and symbols," and it may take some time to unpack their meaning. But "the more at ease we are with the language of the threshold, the greater comfort we can bring to those who are dying and to all those dear to our beloveds."

For my tastes, there is too much attention in this book to psychic readings and related approaches that I'd put in the "paranormal" category. But the message about the variety of ways people communicate at the end of their lives is a worthy one, and all of us would do well to know as much about that as we can.

WHAT THE PRO-SCIENCE MARCHERS ARE AGAINST

The weekend marches for science around the country raised the question of what would make a person of faith turn against science? My answer: fear. For instance, if you believe religion teaches that the earth is only a few thousand years old and that human beings were formed in one day pretty much as we find them today, then you have reason to fear what science is discovering about our origins and about evolution. Religion that produces fear instead of a heart and mind willing to learn is unhealthy. Period.