A lot of Americans -- well, in fact, the majority of people who voted in the 2016 presidential race -- woke up the day after the election disappointed by the results of the race for the White House. 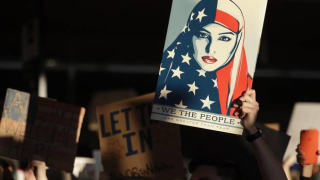 We are beginning to see evidence that their disappointment has stirred them -- including quite a few Muslims -- to get more active in politics, starting at the local level.

As this Atlantic piece reports, "Reema Ahmad, a political consultant and organizer who works with the Muslim community, counted some three dozen Muslims running for local office in the Chicago area on April 4, when municipal elections were held."

I have heard from Kansas City area Muslims about their distress over the presidential election (and some other races), but I don't yet know if and how this is translating into political action here. It's time for The Kansas City Star to assign a reporter to look into that. There certainly have been Muslims elected to local offices in the KC area in the past. For instance, Aasim Baheyadeen served on the Kansas City Board of Education for a time.

The Atlantic story about Chicagoland notes that Muslims there "are trying to find their role in this political moment, when Muslims are a constant topic of national discussion. But they’re also discovering something else: Local politics are hard."

And yet it was some years ago when Christians who identified as conservative decided to get active in local U.S. politics. The result was that they gained considerable ground in controlling local school boards and state legislatures. In effect, they showed how political control can be gained. Now people who identify as more progressive are copying those Christians and seeking to gain political influence.

So the pendulum swings.

In some ways I wish we weren't so deeply engaged in identity politics -- the kind in which it matters whether you tell voters you're a conservative Christian or a more liberal Muslim. I wish, instead, it always had more to do with the common good.

Someone tell me why that's not a good idea.

THE FAITH PART OF THE O'REILLY STORY

There is, of course, a deep religious angle to the story of Bill O'Reilly finally being fired from Fox News after all the allegations of him sexually harassing women. This Washington Post story captures it pretty well: "During his tenure, O’Reilly helped to shepherd the once-fringe right-wing movement into the heart of the GOP by marrying a religious movement with right-wing media. O’Reilly regularly invoked religion as a part of his show and acted as an aggressive right-wing prophet decrying the elitist secular left. Perhaps O’Reilly imagined himself as a modern-day King David, a prophet and psalmist, who with eloquence and persistence, would protect God’s people from the Goliaths of today — most notably the left." I met O'Reilly once when he spoke at one of our annual National Society of Newspaper Columnists conferences. I quickly dismissed him as a pompous bully when he improperly and needlessly attacked one of our members. If you want to read the terrific column my friend Mike Leonard wrote about being slimed by O'Reilly, here's a pdf of it:  Download Leonard-bill-o-column.