Essays to explain our collective madness: 4-19-17

In the English-language Sunday evening worship service that my family attended at the Allahabad Agricultural Institute in India for a time in the 1950s, things usually began with words from the book of Habakkuk, "The Lord is in his holy temple. Let all the Earth keep silence before him." Or from the 46th Psalm, "Be still, and know that I am God." (The Ag Institute is now known as Sam Higginbottom University of Agriculture, Technology and Sciences.) 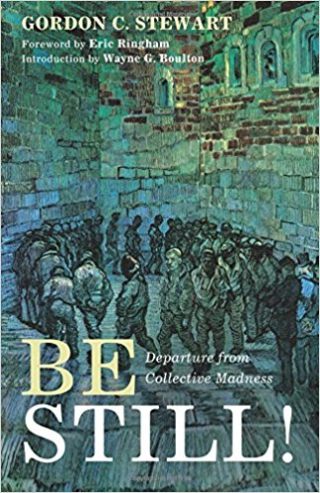 In either case, we were being urged to shut down the cacophony of voices in our heads, all those loose, wandering thoughts about food or love or math. Our focus was to turn from ourselves to the one who, from an impulse of love, started all this.

It's precisely that outwardly focused attitude that permeates the Rev. Gordon C. Stewart's new book of essays, Be Still!: Departure from Collective Madness. Stewart, a pastor in the Presbyterian Church (USA), brings to his writing not just a theology of care, awe and wonder but a pastoral heart that breaks whenever God's own heart breaks.

These essays are short -- usually 1,000 words or fewer. But they do the work that columnists and essayists are charged with doing -- they complicate the thinking of readers. And that's a good thing.

I knew early in this book that I would like it when I discovered Stewart quoting a man who, it turns out, was a friend of both Stewart and me, the late Rev. Steve Shoemaker. I wrote about Steve's confrontation with death here last year. And I wrote about Steve's witty final book, A Sin a Week, here.

Stewart does not walk through the world without noticing things. Or without asking why things are the way they seem to be. For instance, he is aware that we live in a death-denying culture that seems to want us to be young forever. In response, he writes this:

"I'm increasingly convinced that the denial of death (mortality) and the search for immortality are the opposites of the Christian faith in God -- in Hebrew YHWH ("I am Who I Am / I will Be Who I will be" -- who alone is eternal. All else is species hubris, the refusal to live thankfully, graciously, and peacefully within the limits of finite, mortal goodness."

He thinks and writes about the systemic racism that still infects our American culture, about our infatuation with weapons, about the anxiety that seems to pour from our pores, finally terrorizing us and causing us to miss so many of the miracles of life all around us.

This little book will open your eyes. If that frightens you because you may have to see life differently and be required to change, then avoid Stewart. But if you are open to having new light shine on what you hold dear, Stewart's words can help with that.

A new study suggests there are more atheists in the U.S. than previously reported. I'm not sure what to do with this information. I believe in God, but I don't always believe in new studies.